Anti-fracking activists and anarchists are blocking rail tracks in Olympia, Wash. They don’t plan on leaving. 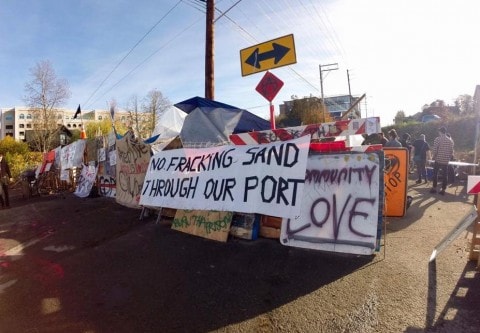 There was little sleep the first night. Everyone was too wired with nerves and excitement. They expected the police to barrel in at any moment.

The encampment went up on Nov. 17, a guerrilla whirlwind of tents, tarps, wooden pallets and two-by-four studs. In just a few hours, the intersection at Jefferson Street SE and Seventh Avenue in downtown Olympia, Wash., was transformed from a drab piece of asphalt into a hulking structure, somewhere between a refugee camp and a carnival tent.

As impressive as the camp was, however, most of the 100 people who collected behind its barricades the first day did not expect it to last.

This was contested turf. Two sets of train tracks snaked north from the intersection to where the Port of Olympia sits on a piece of land jutting into the Budd Inlet like a fat thumb pointing from a fist. The encampment covered both rails, planting the makeshift site — and the people inside — directly in the path of any engines heading in or out of the port.

That was the point. In a peaceful protest spearheaded by members of local indigenous tribes, activists planned to disrupt rail shipments related to the hydraulic fracturing business in North Dakota. A similar effort a year before ended in arrests and flash bangs and burning recycling bins. This year, the activists were sure authorities would react similarly.

“We assumed another raid would be coming instantly,” one participant, who declined to give her name, told The Washington Post this week. “We thought it had to come down. We were feeling nervous. People stayed up all night.”

But when the sun climbed up the next morning, the camp was still there. This week, 12 days into the blockade, the protesters remain. The structure has only grown. “This year it’s much larger,” Kyle Taylor Lucas, an indigenous rights activist involved in the protest, told The Post. “Last year we only covered one of the tracks.”

Lucas said the attitude in the camp is hopeful. “What we are trying to do is resist the forced complicity in this brutal practice to devastate the earth,” she said. “The various affinity groups here bring their own specific messages and commitments and specific reasons for being here. But we came together for the common demands.”

The blockade has successfully created controversy among Olympia’s political leaders, port commissioners and the rail company. But the stand is also a window into protest in the age of President Trump, a time when longtime activists find themselves fortifying the barricades with a younger breed galvanized into action by Trump’s election and other high-profile protests.

The Olympia Stand — or Oly Stand, as the activist call it — is specifically over ceramic proppants, a sandlike substance used in hydraulic fracturing for natural gas. Beginning in 2012, the Port of Olympia contracted to take shipments of proppants from China, the Olympian has reported. The products were then shipped via rail to the Bakken oil fields in North Dakota.

According to Lucas, a former director of the governor’s office of Indian Affairs and a member of the Tulalip Tribes and the Nlaka’pamux Nation in British Columbia, the shipments, which cross both indigenous traditional land and treaty land, are another instance of the government making decisions about land use without consulting indigenous peoples.

“We indigenous feel a special calling as historic land defenders and water protectors whose very subsistence, culture and existence is tied to and dependent upon the sacred land and waters,” she told The Post. “We want to see the fracking shipments stopped immediately.”

Last November, as the Dakota Access Pipeline protests were making headlines across the country, Lucas and other activists set up camp on the location.

Seven days into the action, the group had pressured the port enough to arrange a meeting with the activists. But 12 hours before the scheduled sit-down, police in tactical gear raided the camp in the middle of the night to allow a train to pass, Lucas said.

Twelve protesters were arrested in the fallout. According to the Olympian, some activists threw items at the train as it passed. Following the raid, “masked people supporting the group” marched through downtown, “blocking roads, dumping trash, throwing beer kegs and lighting recycling bins on fire,” the paper reported. Police used flash bangs to subdue the marchers.

Surprisingly, a week after the encampment was cleared, Olympia Police Chief Ronnie Roberts publicly rebuked port officials for failing to come to terms with the activists. He even called on the port to stop shipping proppants altogether.

“I don’t want my department to be the scapegoat for the decisions the port is making,” the chief told Olympia’s city council, the Olympian reported. “I have spent the last five years empowering our department to build trust and build relationship with our community. I don’t want to lose those efforts. It angers me to have to put our officers in combat gear and face off with members in our community over something I don’t believe in myself.”

The 2017 blockade is composed of a much more diverse range of players, from indigenous activists to anarchists to Libertarian Socialists. Now an ever-growing array of tents and boards, pictures and videos show that the whole edifice is scrawled like a bathroom wall with handwritten political slogans and statements.

Inside are living quarters, two kitchens, a family quiet area, couches and sofas, even a bashed-up piano. The blockade hosted a punk rock show. Around 75 to 100 protesters are on-site at any given time, Lucas estimated. Active Twitter and Facebook accounts regularly post and live-stream from the camp.

The general vibe is different from last year, Lucas admits, due to the presence of many younger activists from different political ideologies. The rights of the indigenous, however, are a common ground of agreement, she said.

“I should note how uplifting it was for we indigenous women to hear all the young ones make strong and unequivocal statements in solidarity with us,” she added in an email. “And they’ve offered to stand with us in whatever we do if we’re raided tonight and in the future.”

The encampment seems to be exerting pressure on the port.

Last week, J. Bradley Ovitt, the president of Olympia & Belmore, the railroad operating on the tracks, sent a letter to Olympia’s mayor and chief of police urging authorities to “take an active role in the removal of the trespassers on the rail line.” Ovitt argued the blockade has stalled rail traffic; a “number of customers have indicated that their facilities will need to be idled within a few days if service is not restored,” he concluded.

But the city is hesitant to get involved. “This feels like a repeat of last year, and nobody wants to go through what happened last year,” Steve Hall, Olympia’s city manager, told the Olympian. “Their beef is really with the port, not with the city.”

This week, port officials offered to meet with the activists to discuss the situation. But “then in camp tonight we heard that we may be raided in the morning,” Lucas added Tuesday night. “Who knows when in the morning.”