We killed it: Australia Day is officially dead 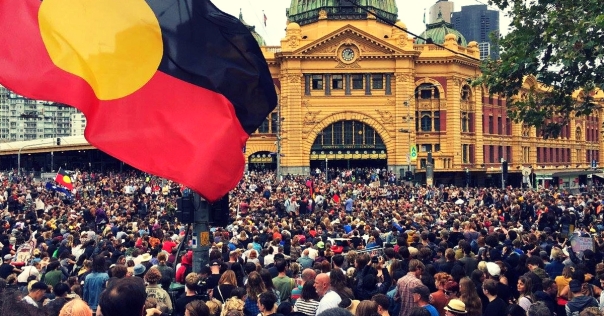 Thousands of protesters made history across Australia today with the largest nationwide Australia Day (Invasion Day) protests ever seen.
By Welcome to country, January 26, 2018

Protest numbers had been growing steadily in recent years but it was this year when everything came to a climax. In previous years protests were only publicised on social media in the lead up to Invasion Day. This year the mainstream media had no choice but to start telling the public about what was being planned.

The mainstream media was also on board during the protests with live streams of speeches and marches in Melbourne, Sydney & Brisbane. Once again this is something that has not happened before.

There was so much discussion about Australia Day this year without the public ever seeing how big protests actually are. Now there is no denying the sheer size of these protests. The question now needs to be asked. How long will this continue to go on for?

We are currently at a stalemate where the government wants to use Australia Day as a propaganda tool. They know that ending Australia Day will result in a national discussion that will set Australia in a new direction founded upon Indigenous and non-Indigenous values and leadership.

Invasion Day protests are now a huge embarrassment for Australia at an International level. How long will the government continue living in a fantasy land where they believe we will eventually assimilate and accept the illegal dispossession of our land? It is those who hold a ‘white australia’ mentality who need to move on and get over it. They cannot continue clinging onto their racist colonial past and expect the nation to be united.

Whether or not we see the government force Australia Day onto the public again, one thing is for certain, Australia Day is already dead!

Shout out to all the mob who turned up at events today and to all of those involved with countless hours of planning and organisation. Special mention to the Warriors of the Aboriginal Resistance, Blackfulla Revolution, FIRE, FISTT and NITV who made today HUGE.