Mom of Indigenous man shot dead by police: ‘What did he do that was so bad?’ 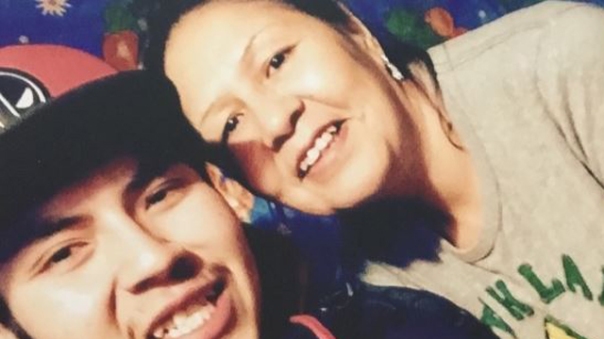 The family of Joey Knapaysweet released this photo and a statement Thursday about his recent death. Above he is seen with his mother Micheline Knapaysweet taken just before his death.

by APTN National News, Feb 16, 2018
TORONTO – The grieving mother of a young Indigenous man killed by police in northern Ontario spoke out Thursday, saying the family remains in shock and still doesn’t understand why her son died.

In a statement from the remote community of Fort Albany, Ont., Micheline Knapaysweet said the family needs answers about the death of her son, Joey Knapaysweet.

“What did he do that was so bad that he had to be shot and killed?” Micheline Knapaysweet said. “I am so heartbroken, with so many questions unanswered.”

Police in Timmins, Ont., shot 21-year-old Joey Knapaysweet on Feb. 3, in an as-yet unexplained incident that raised racial tensions in the city and sparked anger from the Indigenous community.

The province’s police watchdog, the Special Investigations Unit, is looking into the incident and has said officers responded mid-morning to a health-care building and a man fled.

“There was an interaction between the man and officers, and one of the officers discharged a firearm,” the unit said in a statement. “The man was struck. He was taken to hospital where he was later pronounced dead.”

His death prompted scores of people to attend a vigil – among them Timmins Mayor Steve Black – and denunciation from Indigenous leaders.

Joey Knapaysweet was from the James Bay community of Fort Albany – more than an hour’s flight from Timmins. He had gone to Timmins to “seek help in dreams for betterment of his life,” according to his mother’s statement.

His mother also released two photographs, including the last one of them together just before he left home.

“I cannot sleep at nights, I need answers,” she said. “This is my son, my child.”

The family asked for privacy, saying they were not yet ready to speak directly to the media.

Black, who urged calm after what he said was a rare shooting, has acknowledged that relations between Indigenous and non-Indigenous people in the city took a hit.

Knapaysweet died the same weekend as Agnes Sutherland, an ailing 62-year-old also from Fort Albany, who had been in police custody after an incident at a shelter. The Special Investigations Unit is looking into her death as well.

The deaths, along with the acquittal last week of white farmer Gerald Stanley in Saskatchewan in the 2016 killing of a young Cree man, Coulten Boushie, have cast a harsh spotlight in recent weeks on attitudes toward Indigenous people.

The Stanley verdict sparked protests across the country along with condemnation from the federal justice minister, with critics calling the justice system biased against Indigenous people.