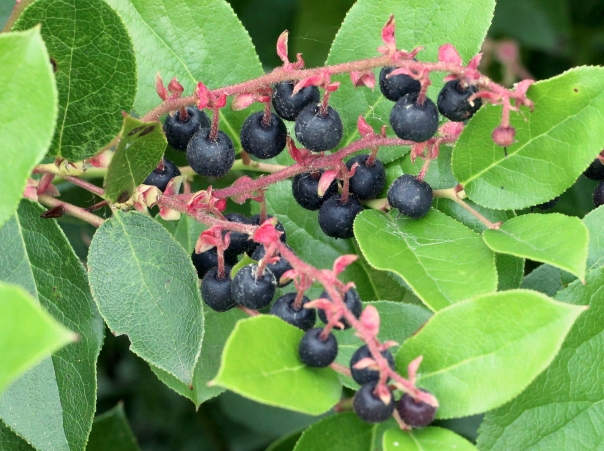 Move aside blueberries, cranberries and strawberries, there’s a new contender for the title of healthiest berry for us to eat. And you won’t find it in the grocery store.

Recently published research led by University of Victoria plant biologist Peter Constabel shows that salal—a wild berry common to coastal areas of western North America—is an antioxidant superstar, packed with higher levels of health-promoting plant chemicals than most other berries out there.

Studies suggest that foods high in antioxidants have long-term benefits to human health, including a reduced risk of cancer, cardiovascular and neurodegenerative diseases, as well as anti-inflammatory effects.

“Salal berries may not be widely known or consumed today, but they were a staple traditional food for northwest coastal peoples, who mashed and dried them into cakes and fruit leather for winter use,” says Constabel, who studies how and why plants produce biologically active compounds.

Salal is a leathery-leafed shrub in the heather family that grows to about five feet in height. Its spring flowers are tiny fuzzy white bells. The small berries—which ripen in late summer—are a dull blue-black and are also slightly hairy. Berry flavour varies with soil and sun conditions but can be described as an earthy cross between blueberry and blackcurrant.

Five years ago, Constabel became the first in the world to reveal, at the molecular level, how blueberries ripen and produce a group of antioxidant compounds known as flavonoids. He then turned his attention to salal.

His research team—which included undergraduate student Andrew Ferguson and PhD student Gerry Gourlay, along with collaborators in Finland and Italy—measured more than 50 “phytochemical” compounds and antioxidant capacity over the course of salal fruit development. They found that salal flavonoid concentrations are the highest among common berries except highbush cranberry (a wild honeysuckle relative).

Why do berries possess this extraordinary chemical cocktail? It certainly didn’t evolve for our benefit.

“It’s undoubtedly for the plant’s protection,” says Constabel, noting that salal berries are unusual in that they stay on the plant all winter without getting mouldy.

The salal paper was published in the March issue of Phytochemistry, the international journal of plant chemistry, plant biochemistry and molecular biology.

The study was funded by the Natural Sciences and Engineering Research Council.