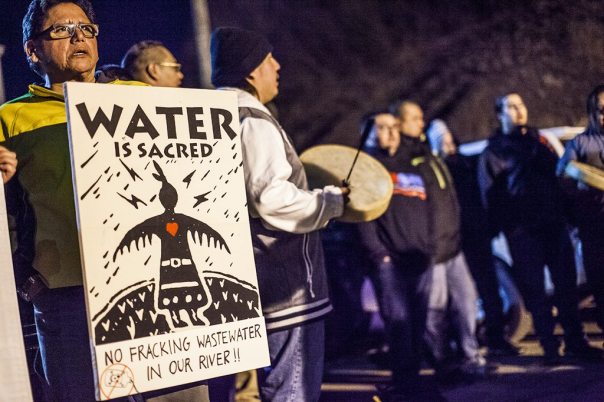 A Seneca Nation of Indians member holds a sign used at Standing Rock to oppose the fracking wastewater treatment facility at the headwaters of the Ohi:yo’ (Allegheny River). © Steven Rubin for Public Herald

by Joshua B. Pribanic, and Melissa A. Troutman for Public Herald, March 3, 2018

In Coudersport Pennsylvania, over 100 members of the Seneca Nation of Indians appeared at a public meeting to oppose a fracking wastewater treatment facility planned for development on the Allegheny River, known by the Seneca as the Ohi:yo’, which means “beautiful waters.”

“We’re the protestors of tomorrow,” Seneca Treasurer Maurice John stated during public comment to the Coudersport Area Municipal Authority (CAMA) board on the evening of February, 26. “The next generation is going to remember us. And they’re going to remember us telling your astute group here that we oppose the contamination of the Ohi:yo’ — or the Allegheny River.”

The fledgeling company Epiphany, LLC and the Coudersport Municipal Sewage Authority have been meeting since June 2017 to plan a build out of the fracking waste treatment facility at the river’s edge. The Allegheny or Ohi:yo’ is one of three rivers that begin at the Triple Divide in Potter County, Pennsylvania, where headwaters travel thousands of miles across the eastern United States serving drinking water to millions of people downstream.

The Pennsylvania Department of Environmental Protection (PA DEP) is currently reviewing Epiphany, LLC’s permit application and is expected to approve the facility in the coming months. Epiphany’s application to DEP does not include monitoring for radioactive material or chemicals used for fracking before treated waste is discharged into the river.

Wastewater produced by fracking is known to be radioactive. A new study by Dr. Avner Vengosh of Duke University revealed dangerous amounts of radioactive material in rivers downstream from facilities that attempted to treat wastewater from oil and gas operations.

Epiphany LLC recently distributed a fact sheet to the Coudersport community in an attempt to downplay concerns first raised by Public Herald about the accumulation of radioisotopes in the river. The fact sheet stated that discharge from their treatment facility to the publicly owned waterworks would contain radioactive levels no greater than what is normally found in lakes and streams. However, there are currently no state or federal regulations requiring the facility to monitor for levels of radioactive material in what will be nearly 50,000 gallons of discharge per day.

Coudersport Municipal Sewage Authority Chief Operator Bill Carpenter told Public Herald that the sewage treatment plant has never tested for radioactive material in the past. “We won’t do anything until [DEP] tells us what we have to do, and then we’ll go from there — it may be something we might actually want to do — which may include what you’re saying, testing for radioactivity.”

Public Herald sent Epiphany’s fact sheet to Dr. Vengosh who stated that “even if only a small amount of radioactive material remains in the outfall, and the volume of effluent is large, one can expect to see a build-up of radiation in river sediment.”

The majority of the public comments provided by the Seneca Nation gave warning to the potential threat of radioactivity that would enter their territory if this facility is approved by the PA DEP.

“We are concerned because CAMA apparently has no intention of monitoring for radioactive contaminants in effluent it proposes to take from Epiphany and then release into the Allegheny River,” Director Lisa Maybee of the Seneca Nation Environmental Protection Department stated during CAMA’s public comment.

While most of the comments focused on water issues, Nicholas Snow emphasized treaty rights that the facility would violate, “We have treaties with the state of Pennsylvania that say that these rivers will not be poisoned because they’re for both of us…you’re wasting your money if you try and go against these because we have never lost when it comes to these treaties.”

A letter read by Seneca Council Member Tina Abrams that was drafted by Public Herald and the Seneca Nation stated, “Epiphany does not plan to monitor key contaminants of concern including radioisotopes before discharging 42,000 gallons of treated waste into the Allegheny River per day.”

When finishing the letter Abrams added, “As a mother, and a grandmother, and a fierce protector of our river and our lands, I ask you to really consider this project and to stop it.”

Epiphany’s co-founder, Tom Joseph, told local papers that the Seneca Nation was misinformed, while their president Mike Broeker boasted that Epiphany’s effluent would be cleaner than wastewater from homes (Epiphany’s statements have not been validated with public results that measure radioactivity in the company’s effluent over a period of time). Neither Broeker or Joseph addressed the Seneca concerns about the lack of monitoring for radioactivity or fracking related chemicals in Epiphany’s proposed application to DEP.

Over the past month, the Department received over 3,000 emails and letters from citizens as well as officials from the U.S. Army Corp of Engineers, U.S. Fish & Wildlife, the PA Fish & Boat Commission, the NY Dept. of Environmental Conservation and others concerned about the facility. A growing list of government organizations and citizen groups are now voicing their concerns alongside the Seneca Nation of Indians, stressing the need for more serious oversight of radioactive material and fracking in general.

Clean Water Action submitted a letter to DEP saying the facility would be illegal, “we are most concerned about the proposed discharge of unconventional oil and gas wastewater to the Coudersport Area Municipal Authority (CAMA). As DEP should be aware, the U.S. EPA issued a rule in 2016 which banned unconventional oil and gas wastewater from being discharged to any POTW, regardless of pretreatment.” Although, some treatment facilities in Pennsylvania have been grandfathered in and issued a special exemption to this rule until 2019.

The National Congress of American Indians signed a resolution declaring support for the Seneca Nation and calling “upon the President and Congress” to ensure all decision makers “demonstrate compliance with federal trust obligations, treaties, consultation requirements, the United Nations Declaration on the Rights of Indigenous Peoples, and all other statutory responsibilities of federal agencies” before any permit is issued.

After the CAMA meeting, two of the board members stated that the appearance of the Seneca Nation and their concerns will impact their decision about whether or not to move forward with the wastewater facility.

“They brought up some things that I was unaware of,” CAMA board member Paul Herzig told Public Herald. “Like I said, I was moved. It probably will affect my decision.”

Degaweno:das (he who thunderz) — born into the Wolf Clan of the Onondowa’ga:’ — explained to the CAMA board, “You’ll be seeing more of us if you choose to perpetuate this nonsense.”

“Don’t be guilty of that corporate thinking,” Flip White told the board. “Think of people, the earth and the future; because that’s what’s really going to be affected by whatever decision that you make.”

“We lived through the 1964 Kinzua Dam. They relocated 129 families,” Maurice John told the board. “We suffered, we lost a lot of our culture. We lived along the river and we were removed; everything, our whole lifestyle changed. So, when I came into your valley tonight, it’s beautiful it’s pristine, it’s clean; you’re good people and I respect that very much. But, I’m just here to tell you there is a difference, and we do count. When we pray we pray for everything on this earth, including and especially the water.”

Jason Corwin, Executive Director of the Seneca Media & Communication Center commented, “This is one of those things that you just can’t afford to play around with at the headwaters of a major river.”

mental engineer of the Seneca Research, Remediation, and Restoration LLC stressed that, “The accumulation of radioactive material at the headwaters of the Allegheny becomes a national issue. The proposed facility will create environmental and human health risks at this site even if the water does not discharge to the POTW [publicly owned treatment works].”