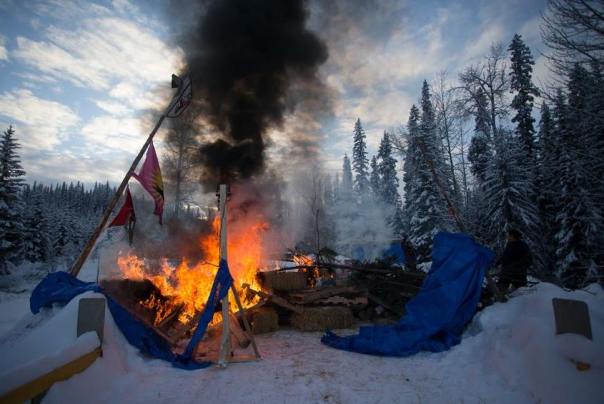 Burning barricade at Gidimt’en checkpoint on Jan 7, 2019, part of a series of additional blockades which served to stop the RCMP advance. Photo: Jesse Winter/StarMetro Vancouver.

Windows were covered with blankets.

On the bridge nearby, a gate was topped with barbed wire and monitored by a security camera, as Unist’ot’en clan members awaited the inevitable return of police.

Around 8:30 a.m. Tuesday, spotters along the logging road reported police were on the move again with more vehicles and heavy equipment.

“I love waking up to the sound of a helicopter,” said one of the land defenders, clutching a mug of hot coffee. Another rushed out to film the aircraft.

Exhausted after a long day, people spent the night sleeping on mats laid out over the floors of the three-story building.

Volunteers made the rounds collecting clothing and face coverings that people wanted destroyed, lest they be used by police to identify those involved in the Gidimt’en blockade on Monday. By the end of the day, police had arrested 14 people, while others fled down the Morice West logging road to the Unist’ot’en camp, about 44 kilometres outside the town of Houston.

The Gidimt’en blockade was the latest act of defiance in a Wet’suwet’en grassroots uprising against the First Nation’s elected band council leadership and its decision to ink a $13-million agreement to support a pipeline.

The pipeline project by TransCanada PipeLines Ltd., a subsidiary Coastal GasLink, will bring natural gas through the area to the proposed LNG Canada facility in Kitimat, B.C.

While the band council signed the deal on behalf of the Wet’suwet’en First Nation, all five of the clans that make up the nation are opposed to the decision. The clan chiefs, who inherit their positions but are still considered integral leaders of their communities, say the First Nation’s band council only has jurisdiction over the reserve, not their entire traditional territories.

Each Wet’suwet’en clan is made up of a number of houses, also headed by hereditary chiefs. These house chiefs also unanimously supported a decision to block Coastal GasLink from entering their territories, citing Article 10 of the United Nations Declaration on the Rights of Indigenous Peoples. That article says Indigenous Peoples must not be “forcibly removed” from their territories.

On Monday, Rob Alfred was the last to leave the Gidimt’en checkpoint. With the police stopped temporarily by a burning roadblock set by protesters, he leapt onto a snow machine and headed up the forestry road, felling trees behind him.

One of those trees appears to have stalled the police advance toward the Unist’ot’en camp. They refused to continue until they could clear a dead snag hanging over the road.