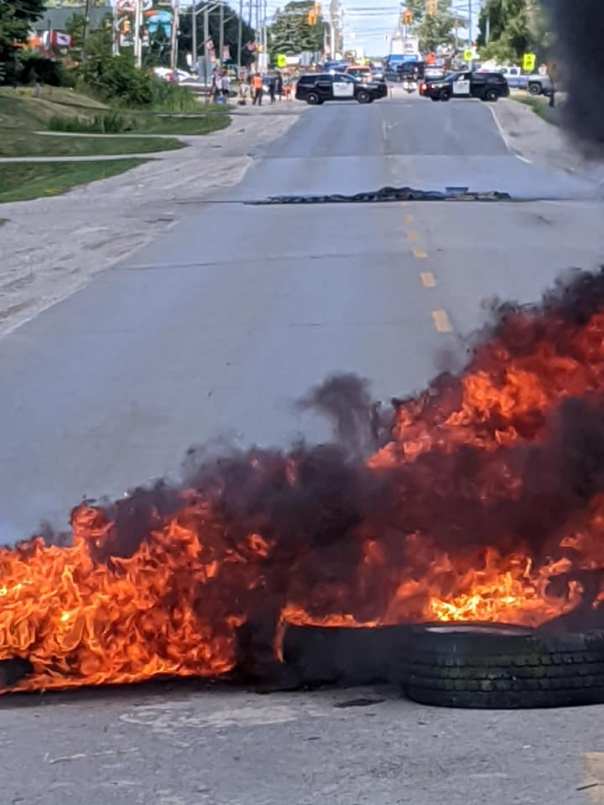 “This is starting all over again,” said Anderson, who moved to Caledonia on the very day in 2006 that Six Nations protesters set up an encampment on the former Douglas Creek Estates (DCE) property, sparking a bitter land claims dispute that divided the community for years.

“The cops were in the same position they are right now,” Anderson said, pointing to police cruisers blocking the road near the Canadian Tire parking lot.

Using tires, wooden skids and other materials, protesters set several fires a stone’s throw from the DCE lands, sending black smoke wafting over town. They gathered in response to Haldimand OPP raiding a construction site on the south end of town that morning to forcibly evict Six Nations members who had been occupying the site since July 19.

Officers were enforcing a Superior Court injunction handed down Friday ordering the protesters to leave the McKenzie Meadows site, which the Six Nations group renamed as 1492 Land Back Lane in reference to their claim of Haudenosaunee sovereignty.

The protesters didn’t budge, prompting police to move in Wednesday morning, where they encountered resistance. 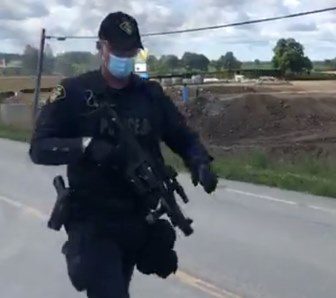 In response, protests sprang up on Argyle, the Highway 6 bypass and Sixth Line.

“This is like déjà vu all over again. Incredible,” said Anderson, who spotted the smoke from his backyard and walked over to investigate.

“There’s no warning. Just one day, bang, it’s there. And from there, where’s this going to go? They’re not moving. They’re going to be here for a while.”

Anderson was among many residents who expressed their frustration at the blockade, with memories of the Douglas Creek Estates protests, which ignited years of acrimony in the community and beyond, fresh in their minds.

“Here we go again,” one man said as he turned his car around at the roadblock to join the traffic inching back along Argyle.

Cecilia Román said residents who grumble at the inconvenience caused by the protest are missing the point.

“I understand they’re irritated, but I don’t think a lot of people are understanding why the Natives are doing this,” said Román, who lives in Caledonia and works on Six Nations. 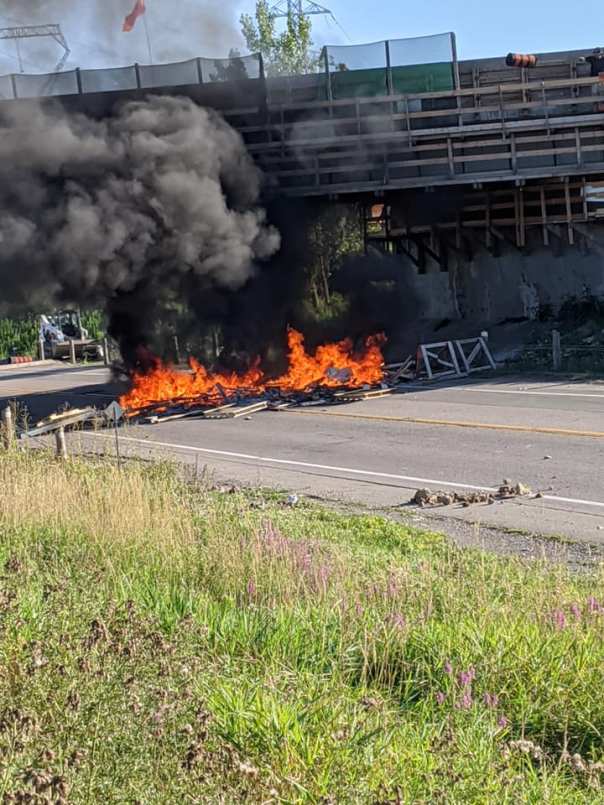 Her memories of the 2006 protest are of police officers using pepper spray on demonstrators, and of racist attitudes toward Six Nations members that she still sees in the community today.

“I think there is a lot of racism here that people don’t really put a lot of light on,” Román said.

A dose of empathy and education about Indigenous issues, including the legacy of residential schools and the reserve system, would go a long way to explaining why the protesters, who describe themselves as “land defenders,” take action, Román said. 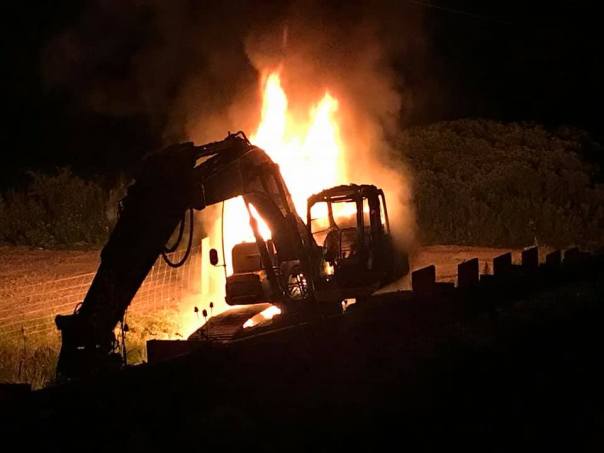 “I think that what they’re doing isn’t wrong. They’re standing up for their land, and they want to be respected. They want their voices to be heard,” she said. “If the roles were reversed, we’d be fighting for our land.”

Witnesses say the police came out in force to clear the construction site, where developers plan to build 219 detached homes and townhouses. A police helicopter flew overhead as the protest then expanded throughout Caledonia.

McKenzie Road remained closed throughout the day as officers monitored the area. Representatives from Losani Homes, one of the developers involved in the project, were on hand to check if any of the construction materials that protesters had used to barricade the entrance were damaged.

As of mid-afternoon, Six Nations and Mohawk Warrior flags still flew at the site.

Six Nations elected band council has distanced itself from the protesters because the developers previously compensated the reserve with cash and land at a different site.

In an interview on Friday, the day the injunction was issued, protester Skyler Williams said the Canadian government and band council alike need to consult more widely before further development can happen on disputed territory.

“Six Nations is a whole other country. You’ve got to understand that,” Williams said.

“So if you’re not going to come to the table for meaningful discussion, to make it a real process where everybody in our community feels heard and accommodated and consulted with, then you’re going to continue to have these flashpoints in time where you’re met with resistance.”