A long-running annual pageant recalling the 1692 retaking of Santa Fe by Spanish conquistadors spurred raucous, roving protests Friday that wound through downtown streets and resulted in at least eight arrests.

The clash over the Entrada, anticipated amid heightened racial and ethnic tensions nationally, pushed a simmering conflict over Santa Fe’s own legacy of colonialism to a new level. Coming after city leaders had appealed for reconciliation between organizers of the Fiesta de Santa Fe and Native American activists, the fracas that unfolded on and around the Santa Fe Plaza seemed a big step back from diffusing a controversy at the heart of the community’s very identity.

END_OF_DOCUMENT_TOKEN_TO_BE_REPLACED

Australia On this day: Pemulwuy is killed

ON 2 JUNE 1802, Pemulwuy was killed, bringing an abrupt end to his long- fought battles with encroaching British settlers. Two European colonisers shot dead the Indigenous resistance fighter – an original inhabitant of Toongabbie and Parramatta area, determined to Indigenous ownership of the land. END_OF_DOCUMENT_TOKEN_TO_BE_REPLACED

NoCanada: Looking for Contributors and Co-Conspirators!

Celebrations of the canadian state’s 150th anniversary are well underway and are looking to heat up as we approach July 1st. Over the past couple of months a few of us have been putting together a website/multimedia project against the canada 150 project as well as to put forward ideas that are against the state, colonization, capitalism, and all the misery that “canada” has meant for so many people.

We’re looking for your help to pull it off! END_OF_DOCUMENT_TOKEN_TO_BE_REPLACED

by Nick Estes, The Red Nation

These were the concluding remarks to the first annual Native Liberation 2016 Conference convened at the Larry Casuse Center in Albuquerque, NM on Aug. 13, 2016. Nick Estes is a co-founder of The Red Nation and a member of the Leadership Council.

The Red Nation formed in November 2014 out of a collective desire to create a platform for revolutionary Native organizing and to fight back against this settler colonial system that seeks our annihilation. That very summer, two Navajo men, our relatives Allison “Cowboy” Gorman and Kee “Rabbit” Thompson, were brutally murdered by three non-Native men. The story is familiar to most of us. END_OF_DOCUMENT_TOKEN_TO_BE_REPLACED

Philippines: Anniversary of Battle of Mactan

On this day in 1521 Indigenous peoples on the island of Mactan in present-day Philippines defeated a heavily armed Spanish force and killed their commander, Magellan.  This was the first Spanish attempt at colonizing what would eventually become the Philippines. END_OF_DOCUMENT_TOKEN_TO_BE_REPLACED

The British had more troops and resources on a global scale, but they underestimated what was needed to take over Nova Scotia in 1675, and remained on the defensive until they made peace with the Mi’kmaq in 1761. This photo of Mi’kmaq in Nova Scotia is from around 1890. (CBC News, supplied by Nova Scotia Archives Twitter)

In the early clashes between the British and Mi’kmaq, the British usually came out on the losing end, new research suggests.

The Mi’kmaq were so successful at defending against the settlers, British soldiers were often too scared to leave their forts, according to historical documents.

END_OF_DOCUMENT_TOKEN_TO_BE_REPLACED

Long Shadow of the Pines: 25 Years Since the 1990 Oka Crisis

My name is Clifton Arihwakehte Nicholas, I am a Kanienkehaka (Mohawk) from Kanehsatake (Oka).  I was a young man involved in the 1990 Oka Crisis from it’s start and throughout that summer.  The Crisis was a critical point both in my life and in the community of Kanehsatake.  It’s impact is still being felt in Kanehsatake and moreover throughout Indigenous communities and movements in Canada from coast to coast.  An examination and retrospection of those events needs to be told by those intimately involved in that historic summer.  Furthermore a wider perspective as to the impact the crisis had on Indigenous people, movements and the government responses to them in light of the events of 1990 from Idle No More to Elsipogtog. END_OF_DOCUMENT_TOKEN_TO_BE_REPLACED

Book Review: The Victory With No Name 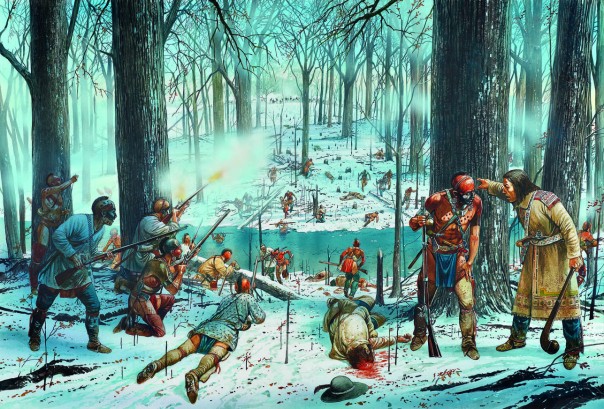 Professor Colin Calloway’s new book, The Victory With No Name, chronicles how a confederation of Native nations defeated the U.S. Army when it invaded Indian lands across the Ohio River in 1791. Calloway, as usual, tells the story well, with lucid prose and thorough documentation.

The invasion, by the first army organized by the United States, under the command of Major Gen. Arthur St. Clair, aimed at the destruction of Indian villages along the Maumee River to open the way for “settlers” (as if the land were not already settled—an example of the way language can obscure reality) and land speculators. The success of the Indians thwarted the invasion, scattered the “settlers,” and discouraged the speculators. END_OF_DOCUMENT_TOKEN_TO_BE_REPLACED

Maori commemorate 150 years since Battle of Orakau against British