Pipelines ready to be placed into trenches, North Dakota.

Company says pipeline construction complete on each side of Lake Oahe

Energy Transfer Partners LP on Tuesday said it was not slowing down construction of an oil pipeline in North Dakota that is contested by environmentalists and Native Americans groups.

The owners of the Dakota Access Pipeline on Tuesday said it was moving equipment to prepare for tunneling under Lake Oahe, the water source that has been a focus of protests, even as federal regulators have not given a go-ahead signal that the line will be able to proceed. END_OF_DOCUMENT_TOKEN_TO_BE_REPLACED

Haida Raid 3: Save Our Waters was released this week, in response to the December 2013 recommended approval of the controversial Enbridge Northern Gateway. END_OF_DOCUMENT_TOKEN_TO_BE_REPLACED

“It changes the narrative quite a bit,” Anthony Swift, an international lawyer at the Natural Resources Defense Council in Washington, said of the tumble in crude prices. END_OF_DOCUMENT_TOKEN_TO_BE_REPLACED 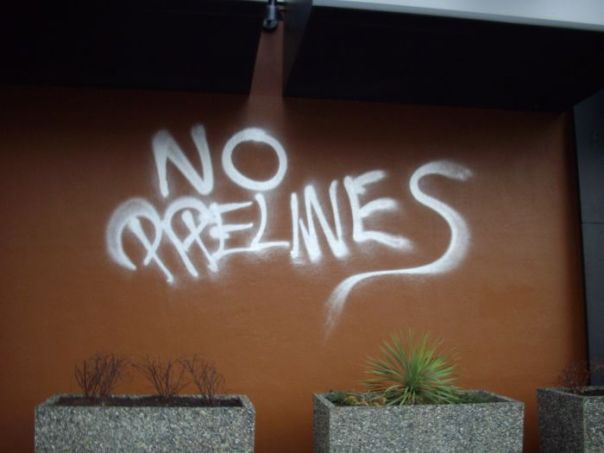 No Pipelines graffiti in East Vancouver.

Opposition to Kinder Morgan’s Trans Mountain pipeline expansion has risen since the beginning of the year, a poll suggests.  Opposition has grown by six points since January (from 42 per cent to 49 per cent opposed) with women and young people (18 to 34) most opposed, according to a the Insights West poll released Wednesday. END_OF_DOCUMENT_TOKEN_TO_BE_REPLACED

Business mural with “No Pipelines” spray painted on it, Commercial Drive, Vancouver.

Vancouver residents are used to seeing graffiti on city streets, but recent work by an unknown graffiti artist is not sitting well with some of them.

The graffiti with a consistent “No Pipelines” message has been popping up on residential buildings and businesses along Commercial Drive, Victoria Drive and Main Street.

END_OF_DOCUMENT_TOKEN_TO_BE_REPLACED

From August 12-15, 2011, members of the Unist’hot’en clan of the Wet’suwet’en nation hosted their second gathering to oppose industrial threats in their traditional territory. Specifically, they are opposed to two major pipelines that will cut through their territory, the Pacific Trails Pipeline and Enbridge’s proposed Northern Gateway pipeline system. END_OF_DOCUMENT_TOKEN_TO_BE_REPLACED