Another delayed liquefied natural gas plant in B.C. has some wondering if the whole industry is in trouble.

An analyst with Global Sustainability Research says the delays are partly due to a ‘global glut’ bringing down energy prices around the globe. END_OF_DOCUMENT_TOKEN_TO_BE_REPLACED

BC Premier Christy Clark speaking at an LNG conference.

It’s possible no export facilities are ever built in B.C., expert suggests

By now, B.C. should be rolling in cash from its burgeoning LNG industry — tens of thousands of new jobs, billions in potential royalties and a roaring economy with all the new investment into the province.

Instead, it’s still waiting for ground to break on any new facility, or even a final investment decision for an LNG plant.

While several liquefied natural gas (LNG) plants are proposed, they have all struggled to get off the ground as they wait for regulatory approval, delay making spending decisions, or cancel plans altogether.  END_OF_DOCUMENT_TOKEN_TO_BE_REPLACED

On Thursday, October 29, Lax U’u’la Defenders prevented Stantec surveyors from conducting unauthorized work on Flora Bank. The surveyors were accompanied by two private security guards who were stopped and questioned by the Defenders. The guards refused to identify themselves or which company they worked for and were told that no work may be carried out on the territory without a permit. The guards then left the Bank along with the Stantec surveyors. END_OF_DOCUMENT_TOKEN_TO_BE_REPLACED

People once paddled great distances to set up fishing camps on the land where Liz Logan’s family has lived for generations in northern British Columbia.

Now Tsinhia Lake has yellowed, the fish have died and her family must carry in bottled water to drink.

The damage from oil and gas industries has prompted Logan, chief of the Fort Nelson First Nation, to help form an alliance with other aboriginal leaders against the provincial government.

END_OF_DOCUMENT_TOKEN_TO_BE_REPLACED

It is seeking a judicial review of the B.C. government’s handling of consultation for the liquefied natural gas project on Lelu Island, near Prince Rupert in northwest B.C.

The First Nation is seeking a judicial review of the B.C. government’s handling of consultation for the liquefied natural gas project on Lelu Island, near Prince Rupert in northwest B.C.

Led by Malaysian state-controlled Petronas, the project’s total cost is estimated at $36 billion, which includes the LNG terminal, pipeline to northeast B.C. and development of natural gas supplies.

END_OF_DOCUMENT_TOKEN_TO_BE_REPLACED

1st project to be approved under combined provincial and federal process

Royal Dutch Shell’s proposed liquefied natural gas project in Kitimat, B.C., has received conditional environmental approvals from both the province and the federal government under an expedited environmental review process.

Under the new Canadian Environmental Assessment Act passed in 2012, British Columbia performs the environmental review process and that assessment is used by the federal government when it gives its approval. END_OF_DOCUMENT_TOKEN_TO_BE_REPLACED

The proponent of a liquefied natural gas plant on British Columbia’s north coast is offering more than $1-billion to obtain the consent of a First Nations community, a groundbreaking proposal that could establish the new price for natural resource development in traditional aboriginal territories.

In a province where resource projects have stalled and sometimes foundered over aboriginal opposition, the tentative deal between the Prince Rupert-based Lax Kw’alaams band and a joint venture led by Malaysia’s state-owned Petronas sets a new benchmark for sharing the wealth from energy extraction.

END_OF_DOCUMENT_TOKEN_TO_BE_REPLACED

Fracking and earthquakes: Exploring the connection 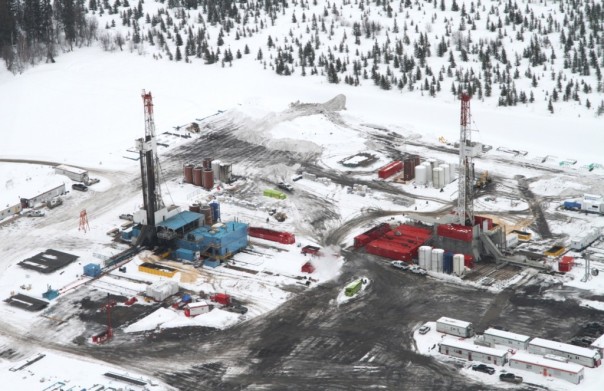 May Mickelow had just settled into her shift as night auditor at the Foxwood Inn in Fox Creek, Alta., when she felt the rumble.

“You didn’t hear anything, but you could feel the earth move underneath your feet quite strongly, actually,” said Mickelow. “I felt dizzy, as if I was suddenly on uneven footing.”

Some hotel guests descended to the main floor, asking Mickelow if she had felt the shaking. She had been through earthquakes before, but not here. END_OF_DOCUMENT_TOKEN_TO_BE_REPLACED 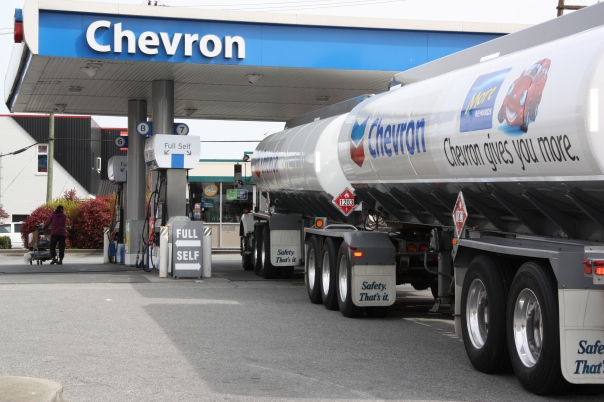 Chevron Corp. is significantly slowing spending on the Kitimat liquefied natural gas project in Canada amid a crash in crude prices and global competition.

END_OF_DOCUMENT_TOKEN_TO_BE_REPLACED 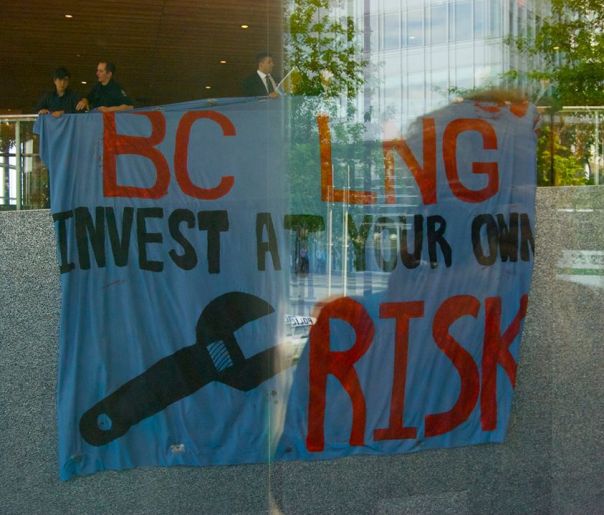 Banner dropped at International LNG in BC conference, May 21, 2013, by members of Rising Tide.

Only two of the major liquefied natural gas projects proposed in British Columbia are expected to proceed as the global industry suffers from an “anxiety attack” due to low commodity prices, according to a new report.

As many as 18 projects have been proposed on the West Coast, but none has secured a final investment decision from investors. B.C. Natural Gas Development Minister Rich Coleman said this month the province remains on track to meet its goal of three LNG facilities in operation by 2020.