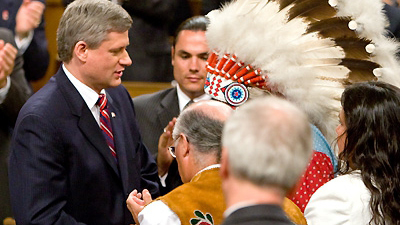 Prime Minister Stephen Harper’s 2008 apology to Indian residential school survivors was a “strategic attempt to kill the story,” according to former speechwriter in the Prime Minister’s Office at the time.

Paul Bunner was the head speechwriter in Harper’s PMO between 2006 and 2009.

Bunner’s views on the Indian residential school apology and the possible motivation behind it recently surfaced on a blog by Coast Salish Native American writer Robert Jago who outed a series of Conservative candidates, current and former MP staffers, along with Bunner for their comments and views on First Nation people. END_OF_DOCUMENT_TOKEN_TO_BE_REPLACED