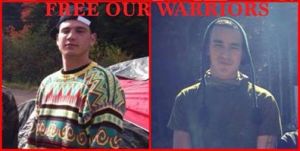 Two anti-shale gas protesters have been sentenced to 15 months in jail in connection to a violent clash with police near Rexton, N.B., last fall.

Judge R. Leslie Jackson gave Breau 423 days of credit for the 282 days he has already spent in custody. That means he has about a month left to serve in his sentence. END_OF_DOCUMENT_TOKEN_TO_BE_REPLACED

END_OF_DOCUMENT_TOKEN_TO_BE_REPLACED 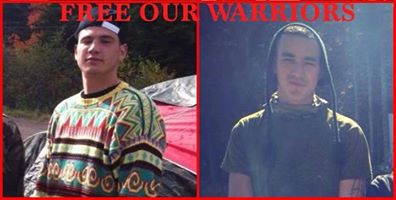 Two anti-shale gas protesters charged in connection with a violent clash with police near Rexton last fall have been found guilty of some of the charges against them, and not guilty others.

Germain Junior Breau of Upper Rexton, N.B., and Aaron Francis of Eskasoni, N.S., were tried together on numerous firearm and assault-related charges. END_OF_DOCUMENT_TOKEN_TO_BE_REPLACED

Verdict postponed because of a power outage that affected government computers

Two anti-shale gas protesters will have to wait until next week for a verdict, all because of an osprey nest.  Germain Junior Breau of Upper Rexton, N.B., and Aaron Francis of Eskasoni, N.S., are being tried together on a number of charges related to a clash between police and protesters on October 17, 2013.

The verdict that was supposed to be handed down by the judge on Thursday was postponed because of a power outage that occurred June 9 in Fredericton. Three days earlier, an osprey built a nest on the power lines, which caused power problems for days.

END_OF_DOCUMENT_TOKEN_TO_BE_REPLACED 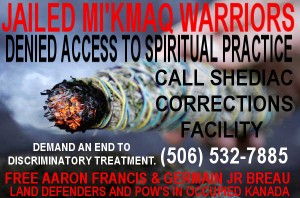 CALL TO SUPPORT AND END TARGETING OF LAND DEFENDERS

The colonial state strikes again. State repression against and the targeting of Mi’kmaq Warriors has escalated. The state is now denying 2 Mi’kmaq Warriors, Aaron Francis and Germain Jr Breau, access to spiritual practices. Aaron and Jr have been held in Kanadian custody without trial since the raid on Oct. 17th – just over 3 months. END_OF_DOCUMENT_TOKEN_TO_BE_REPLACED 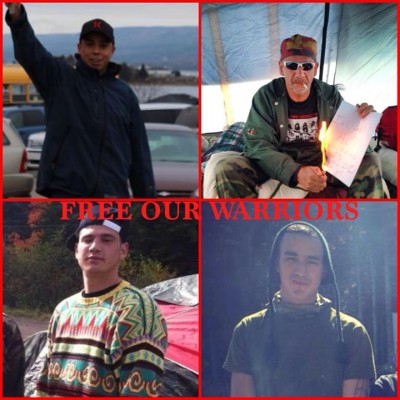 FREEDOM FOR LAND DEFENDERS AND POLITICAL PRISONERS OF WAR

Southeastern Regional Correctional Centre in so-called New Brunswick has just placed Germain “Junior” Breau, 22, into solitary confinement. This is part of the ongoing mistreatment of Indigenous peoples inside of the Prison Injustice System, and a slap in the face to Land Defenders and Warriors standing up for the peoples against fracking. END_OF_DOCUMENT_TOKEN_TO_BE_REPLACED