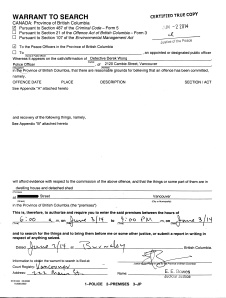 Here are the search warrants used by the Vancouver police for the June 3, 2014, raid in East Vancouver.  The name of the targeted individual and the house address have been blocked out.  There are two separate warrants, one issued on June 2, 2014, and sworn by Detective Derek Wong, who is apparently a member of the VPD Anti-Graffiti Unit.  The secondary warrant is issue on June 3 to Ram Gregoriou (formerly Ramndeep Barn), who is also a Vancouver constable although it is unknown what unit he is stationed in.  The seventh JPG image is of two sticky notes left in the kitchen of the raided house, assumed to be names of cops and rooms they were to search. END_OF_DOCUMENT_TOKEN_TO_BE_REPLACED