Tribes representing tens of thousands of Indigenous people in the U.S. and Canada will sign a declaration against the planned Keystone XL oil pipeline.

Leaders of the Blackfoot Confederacy in Canada and the Great Sioux Nation and Ponca tribe in the U.S. plan to sign their declaration at a ceremony Wednesday at the Glenbow Museum in Calgary — the city where pipeline developer TransCanada Corp. is based. END_OF_DOCUMENT_TOKEN_TO_BE_REPLACED

Some Chase branches in Seattle closed by protests over pipeline loans

Pizza is delivered next to Native American leaders and climate activists demonstrating inside of a Chase Bank location, in opposition to the Keystone XL pipeline, in Seattle, Washington, U.S. May 8, 2017. REUTERS/David Ryder

Native American leaders and climate activists protested at several Chase branches in Seattle on Monday, forcing them to close temporarily as demonstrators demanded the bank not lend to projects like the Keystone XL oil pipeline. END_OF_DOCUMENT_TOKEN_TO_BE_REPLACED

Ranchers and Tribes Unite Once Again to Fight Keystone XL

A week after tens of thousands turned out in support of science and just before thousands more took to the streets for the People’s Climate March, a quieter walk was held at what might be considered ground zero of the country’s energy debate. On April 29, the Ponca Tribe of Nebraska headed south on a 273-mile remembrance walk beginning in Niobrara, Nebraska, and scheduled to culminate 12 days later in the small village of Barneston. The event will commemorate the Ponca’s forced removal from their traditional lands in the 1870s—lands that today are again under dispute to make way for the Keystone XL pipeline.

END_OF_DOCUMENT_TOKEN_TO_BE_REPLACED 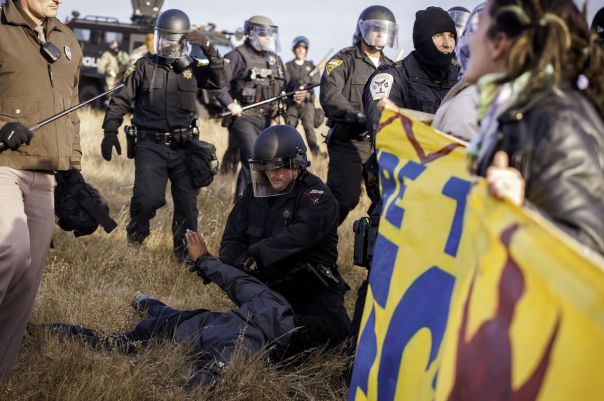 As the protest camp along the route of the Dakota Access pipeline emptied out last week in North Dakota, legislators in South Dakota began considering a potential state law aimed at punishing possible protesters over another oil pipeline.

END_OF_DOCUMENT_TOKEN_TO_BE_REPLACED

Company may be waiting for a more favourable political climate, analyst says

TransCanada Corporation has asked the U.S. State Department to pause its review of the presidential permit application for the Keystone XL pipeline.

The company sent a letter to Secretary of State John Kerry on Monday, saying it believes there is sound precedent for making the request to pause the review.

That adds a new wrinkle to one of the biggest Canada-U.S. political irritants of recent years, involving a proposed pipeline from Alberta to Texas. END_OF_DOCUMENT_TOKEN_TO_BE_REPLACED

Women warriors at a tire fire blockade on Hwy 11, Dec 2, 2013, during resistance to SWN exploratory work for fracking in Mi’kmaq territory (New Brunswick).

Serge Simon steps out of his truck, saunters across Route 148 and into the bushes.

He hops over a broken lath fence, landing in the shrubs on the other side of it. As he presses forward, Simon makes a show of quickly ducking, as though some wayward farmer just fired a rifle blast overhead.

“We’re trespassing,” says Simon, flashing a mischievous smile. “But the way I see it, this is Mohawk land anyway. If anyone sees us, maybe they’ll freak out and think the natives have come to take back their territory.”

END_OF_DOCUMENT_TOKEN_TO_BE_REPLACED

The White House says U.S. President Barack Obama would veto any legislation that tries to fast-track the Keystone XL project even as Republican lawmakers tabled a bill that would do just that in Washington today.

White House press secretary Josh Earnest said he does not expect Obama would sign any legislation that reaches his desk that would unilaterally approve the project, a 1,900-kilometre pipeline that would bring 800,000 barrels of Canadian crude oil to U.S. refineries every day. END_OF_DOCUMENT_TOKEN_TO_BE_REPLACED

US Senate Votes Not to Approve the Keystone XL Pipeline

A controversial bill to approve construction of the Keystone XL oil pipeline failed in the US Senate Tuesday evening. It received 59 “aye” votes, just shy of the 60 needed to send the bill to President Obama’s desk. The fight isn’t over yet; Republicans have said they plan to prioritize approving the pipeline once they take control of the Senate next year.

Below the headlines last week about President Obama’s major climate agreement with China, another environmental story was gaining steam: a vote in Congress to force approval of Keystone XL, a controversial pipeline that would carry crude oil from Canada down to refineries on the Gulf Coast. On Friday, the House voted overwhelmingly in favor of the pipeline, as it has done numerous times in the past. The Senate is expected to vote on an identical bill today. Previous Keystone legislation has always stalled in the Senate due to opposition from Democrats. But the vote Tuesday will likely have more Democratic support than ever before, making it the closest the pipeline has yet come to approval.

END_OF_DOCUMENT_TOKEN_TO_BE_REPLACED

“It changes the narrative quite a bit,” Anthony Swift, an international lawyer at the Natural Resources Defense Council in Washington, said of the tumble in crude prices. END_OF_DOCUMENT_TOKEN_TO_BE_REPLACED

Northern Gateway is not alone: 5 more pipelines to watch 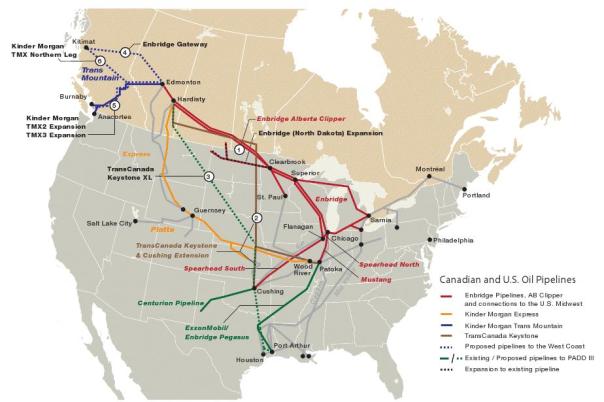 It’s decision day for the Northern Gateway pipeline. In Ottawa, camera positions are being marked out, pencils sharpened and microphones tested. All eyes are fixed on the clock, waiting for markets to close, so today’s announcement doesn’t ruffle any financial feathers.

But Northern Gateway isn’t the only pipeline that could remake the face of North America’s energy supply and roil the continent’s political waters. Here is a list of five more — some well-known, others not so much: END_OF_DOCUMENT_TOKEN_TO_BE_REPLACED