“This is how much money I made working with oil pipelines in Canada.”  Phil Fontaine, right, speaks to Indigenous leaders in Ecuador Wednesday. (Karen Hinton/Submitted)

Canadian Indigenous leaders witnessed first hand this week the devastation and pollution left behind by oil companies in Indigenous lands in Ecuador.

Shell says it will proceed with B.C. energy plans despite political uncertainty

Haisla chief councillor Ellis Ross with a view in the background of his community and Douglas Channel in the fall of 2014. At the time, community members had jobs to pick from as preliminary work for potential LNG projects was underway and Rio Tinto was in the midst of a major upgrade project on its aluminum smelter in Kitimat. Now, Haisla members are leaving town to look for work as LNG projects are in limbo and the aluminum plant project is complete. Gordon Hoekstra / Vancouver Sun

The Haisla Nation, which supports two of the leading proposed major LNG projects in B.C., is in a tough waiting game as the projects remain in limbo.

Activity on both the $25-billion to $40-billion Shell-led LNG Canada project and the $12-billion Chevron-led Kitimat LNG project proposed for the Kitimat area in northwest B.C., where the Haisla claim traditional territory, have slowed to a crawl. END_OF_DOCUMENT_TOKEN_TO_BE_REPLACED 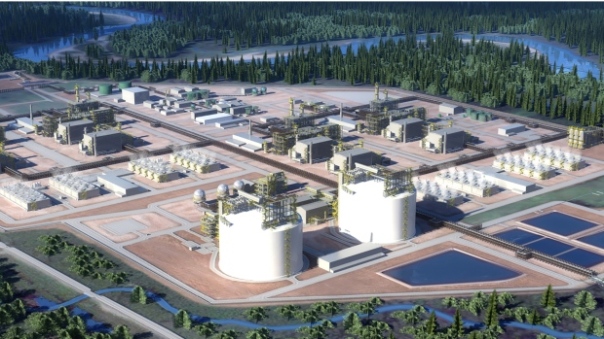 This rendering of the proposed project shows two of the LNG trains. (LNG Canada/flickr)

The huge LNG Canada export project proposed for Kitimat appears to have suffered a setback with Royal Dutch Shell announcing it will postpone its final investment decision.

The announcement comes on the heels of Shell releasing 2015 fourth-quarter results which show a 44 per cent slump in earnings due largely to the slump in oil prices. END_OF_DOCUMENT_TOKEN_TO_BE_REPLACED

1st project to be approved under combined provincial and federal process

Royal Dutch Shell’s proposed liquefied natural gas project in Kitimat, B.C., has received conditional environmental approvals from both the province and the federal government under an expedited environmental review process.

Under the new Canadian Environmental Assessment Act passed in 2012, British Columbia performs the environmental review process and that assessment is used by the federal government when it gives its approval. END_OF_DOCUMENT_TOKEN_TO_BE_REPLACED

Chevron Corp. is significantly slowing spending on the Kitimat liquefied natural gas project in Canada amid a crash in crude prices and global competition.

END_OF_DOCUMENT_TOKEN_TO_BE_REPLACED

The Wet’suwet’en hereditary chiefs have returned a cheque to the province and have backed away from a proposed agreement on the pipeline after the B.C. Ministry of Aboriginal Relations and Reconciliation linked its LNG offer to continued funding for vulnerable children in the northern coastal community.

END_OF_DOCUMENT_TOKEN_TO_BE_REPLACED

CALGARY – A liquefied natural gas project planned for Kitimat, B.C., faces an uncertain future after one of its U.S. partners announced plans to get out of the LNG business.

Apache Corp. said in its second-quarter news release that it plans to ditch the Kitimat LNG project, which it was developing alongside Chevron Corp., as well as the Wheatstone LNG project in Australia.

The Houston-based company has been under pressure from activist hedge fund Jana Partners LLC to restructure.

END_OF_DOCUMENT_TOKEN_TO_BE_REPLACED

TransCanada Corp. has announced plans to build a $1.9-billion pipeline to help deliver natural gas to an LNG project proposed by Chevron and Apache near Kitimat.  The Calgary-based company now has four major natural gas pipelines planned in the region totalling $12.6 billion in investment.

The Merrick Mainline Pipeline Project will run 260 kilometres from Dawson Creek, in ‘s resource-rich northeast, to Summit Lake, where Chevron and Apache’s Pacific Trail Pipeline begins.  Pacific Trail will deliver gas the rest of the way to the coast, where the resource will be chilled into a liquid state and exported abroad via tanker. END_OF_DOCUMENT_TOKEN_TO_BE_REPLACED