Who belongs in Canada’s newest and possibly largest First Nation?

An application for membership in the Qalipu Mi’kmaq First Nation. (Colleen Connors/CBC)

Qalipu Mi’kmaq First Nation, which includes Mi’kmaq from all across Newfoundland, stands to become the largest First Nation band in Canada with more than 104,000 applicants for membership since 2008.

That is, if the band and the federal government can figure out who belongs. END_OF_DOCUMENT_TOKEN_TO_BE_REPLACED 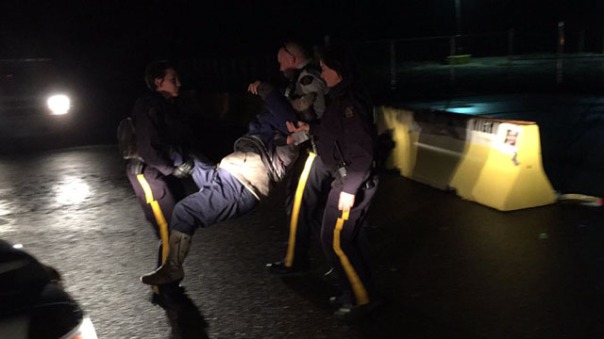 9 people are in custody after an early morning raid at the construction site of the Muskrat Falls hydro-electric project. Photo courtesy: Justin Brake/The Independent.

by Trina Roache, APTN National News, October 17, 2016
Happy Valley-Goose Bay, N.L — Nine people arrested in an early morning raid on a camp at the entrance to the Muskrat Falls hydro-electric construction project are in custody and waiting to go before a judge. END_OF_DOCUMENT_TOKEN_TO_BE_REPLACED

A shocking number was revealed at meeting in St. John’s Wednesday: more than 100 indigenous women and girls are estimated to have been murdered or gone missing in Newfoundland and Labrador.

“It is a big issue, and that’s the point,” said Angus Andersen, who hosted the gathering of about a dozen people at the St. John’s Native Friendship Centre. END_OF_DOCUMENT_TOKEN_TO_BE_REPLACED

Toby Obed fought back tears as he told the court how staff would make students have sex on field trips and forced others to watch. CBC News.

An Inuit man told a St. John’s courtroom Monday that he never felt loved at the Labrador residential school he was forced to attend, and that punishment against Inuit students was very common.

Toby Obed said students at the North West River school were also bullied and taunted but staff did nothing to protect them.

“We were scared of staff. They could do or say anything at anytime,” Obed sobbed as he testified during a class action lawsuit at Supreme Court of Newfoundland and Labrador.  END_OF_DOCUMENT_TOKEN_TO_BE_REPLACED