Bloodless Lies: book review of “This is an uprising.”

This is an Uprising, a widely celebrated new book about how social movements change history, distorts their histories to celebrate non-violence

THE black revolt of 2014 was a turning point in how Americans discussed the use of force in social movements. In the pages of the Atlantic, Ta-Nehisi Coates acknowledged that “violence works.” Rolling Stone and the Huffington Post echoed much the same sentiment. Laci Green–a YouTube star and one of the “30 most influential people on the Internet,” according to Time–posted a popular video drawing favorable comparisons between the Ferguson riots and the revolution depicted in The Hunger Games. This sea change was led by the movement itself as African American youth in Ferguson rejected Al Sharpton and other older leaders, partly due to disagreement on strict nonviolence.

END_OF_DOCUMENT_TOKEN_TO_BE_REPLACED

Beware of the movement police… 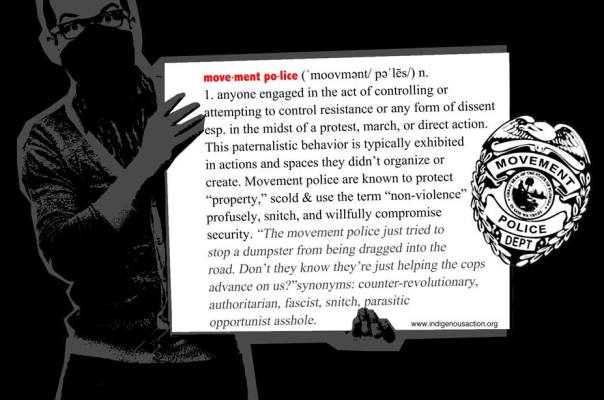 Movement police come in all shapes and sizes, from tribal officials to New Age spiritualists.  They work to control and pacify our people’s resistance.