Grand Chief Stewart Phillip of the Union of BC Indian Chiefs signs the Treaty Alliance Against Tar Sands Expansion in Vancouver, B.C. on Thurs. Sept. 22, 2016. Photo by Elizabeth McSheffrey.

The thunderous pounding of Indigenous drums echoed in the air on Thursday as more than 50 Indigenous nations across North America rallied together to sign a historic, pan-continental treaty alliance against oilsands expansion in their traditional territory.

END_OF_DOCUMENT_TOKEN_TO_BE_REPLACED 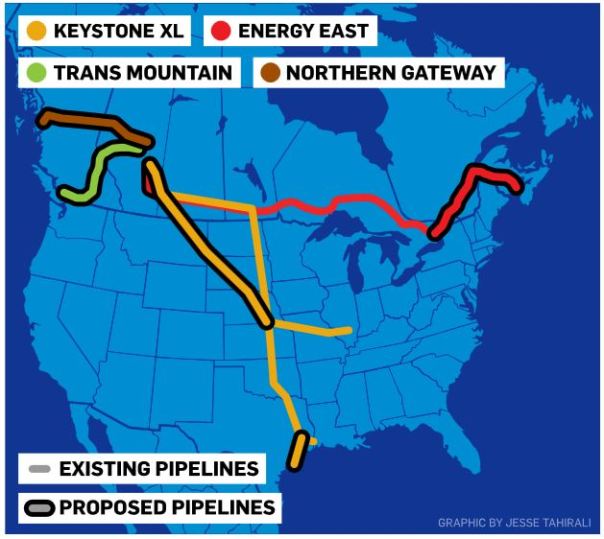 The Liberal government says it is “modernizing” the way Canada reviews pipelines and other resource projects, in a revamped process that considers future greenhouse gas emissions.

The Wednesday announcement was described as a “transition step” before the Liberals establish a permanent set of rules. END_OF_DOCUMENT_TOKEN_TO_BE_REPLACED

A crack in the fracking pipeline: Coastal Gaslink changes its plans 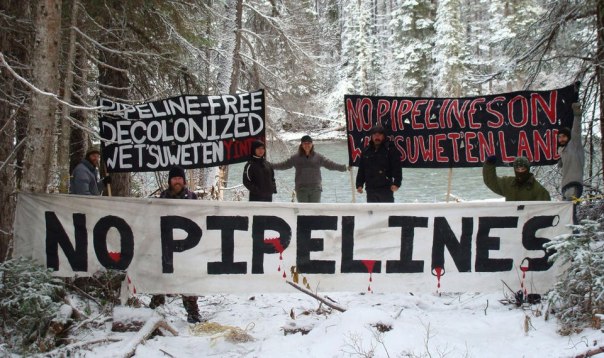 New route is “further away from Unist’ot’en Camp”
by Wild Coast and Forest Action Network, Oct 12, 2015

Great news: Unist’ot’en Camp has successfully stopped police and pipeline surveyors from entering their indigenous territory in Northern BC for another year. Now we learn that executives with Coastal Gaslink are (quietly) seeking to change the fracked gas pipeline route.
END_OF_DOCUMENT_TOKEN_TO_BE_REPLACED 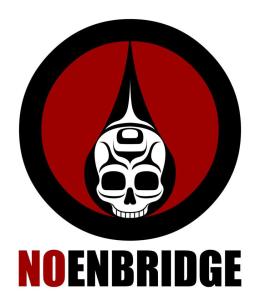 By Geordon Omand, Vancouver Sun/Canadian Press, October 8, 2015
VANCOUVER — The fate of the Northern Gateway pipeline project is now in the hands of a trio of Federal Appeal Court judges who reserved their decision on whether to uphold or quash the government’s approval of the controversial project.

Over six days of legal arguments in Vancouver, the court heard the government didn’t get aboriginal consent or consider the impact on the environment when it approved the project, while proponents claimed a decision to overturn the pipeline approval would kill the project.

The government approved the $7-billion Enbridge (TSX:ENB) Northern Gateway project in June 2014 with 209 conditions, following the recommendations made by a review panel considering the environmental impacts of the interprovincial pipeline.

END_OF_DOCUMENT_TOKEN_TO_BE_REPLACED

Group backed by Aquilinis on publicity blitz, say they have widespread chiefs’ support

Key First Nations in northern B.C. refute there is consensus on an oil pipeline concept initiated by some coastal First Nation members.

Eagle Spirit Energy has issued a trio of news releases in the past week, claiming it has signed agreements and has the support of chiefs along the route of its proposed project — an alternate to Enbridge’s stalled $7.9-billion Northern Gateway project.

END_OF_DOCUMENT_TOKEN_TO_BE_REPLACED

Women warriors at a tire fire blockade on Hwy 11, Dec 2, 2013, during resistance to SWN exploratory work for fracking in Mi’kmaq territory (New Brunswick).

Serge Simon steps out of his truck, saunters across Route 148 and into the bushes.

He hops over a broken lath fence, landing in the shrubs on the other side of it. As he presses forward, Simon makes a show of quickly ducking, as though some wayward farmer just fired a rifle blast overhead.

“We’re trespassing,” says Simon, flashing a mischievous smile. “But the way I see it, this is Mohawk land anyway. If anyone sees us, maybe they’ll freak out and think the natives have come to take back their territory.”

END_OF_DOCUMENT_TOKEN_TO_BE_REPLACED

Grand Chief Stewart Phillip of the Union of BC Indian Chiefs says RCMP officers have booked up hotel rooms in Burns Lake and Smithers, a firm indication of plans to invade the Unist’ot’en Camp in northwestern B.C.

Police officers have booked up hotel rooms in Smithers and Burns Lake in preparation for an invasion of the Unist’ot’en Camp, said Grand Chief Stewart Phillip of the Union of BC Indian Chiefs.

The news came in this morning, said Phillip, confirming what have previously been thought to be rumours of an impending “mass arrest operation” on traditional Unist’ot’en territory in northwestern B.C.

“It’s definitely going to come down,” he told Vancouver Observer. “We don’t have precise numbers, but it very well could be more than 200 (officers), because this story is totally rippling across the country.”

END_OF_DOCUMENT_TOKEN_TO_BE_REPLACED

The B.C. Civil Liberties Association (BCCLA) has sent a letter to the RCMP warning against “an impending, and possibly large-scale, RCMP action in relation to the Unist’ot’en camp”.

The Unist’ot’en camp is a settlement that some members of the Wet’suwet’en Nation began constructing in northwestern B.C. in 2010. Its location was strategically selected to obstruct the path planned for the Pacific Trail natural gas pipeline. The settlement has since been expanded in opposition to the Northern Gateway oil pipeline, which would follow a similar route across the province.

END_OF_DOCUMENT_TOKEN_TO_BE_REPLACED 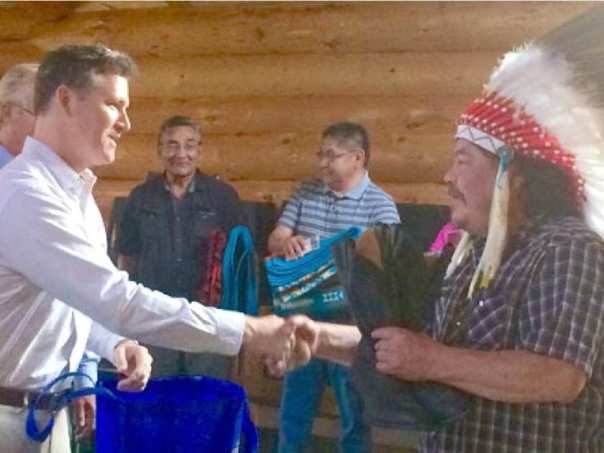 TransCanada has quietly been meeting with First Nations leaders ahead of its Energy East pipeline project, signing 32 “capacity funding agreements” with aboriginal communities in the past two years.

Through these agreements, the energy firm donates money to a reserve and, in return, gets to pitch its $12 billion pipeline to community members.

TransCanada is heavily invested in these deals but insists none of its contributions to First Nations are meant to entice support for Energy East. However, Kanesatake Grand Chief Serge Simon says that accepting said money comes with stipulations he isn’t prepared to honour.

END_OF_DOCUMENT_TOKEN_TO_BE_REPLACED

Chevron officials kicked out of Unist’ot’en

Yesterday Chevron, the company behind the Pacific Trails fracking pipeline, attempted to enter our unceded territories. They have no consent from our chiefs and our hereditary governance system, who are standing strong in their stance against all pipelines. Next to the Wedzin Kwah river, which is pure enough to drink from, Chevron presented us with an offering of bottled water and industrial tobacco. END_OF_DOCUMENT_TOKEN_TO_BE_REPLACED