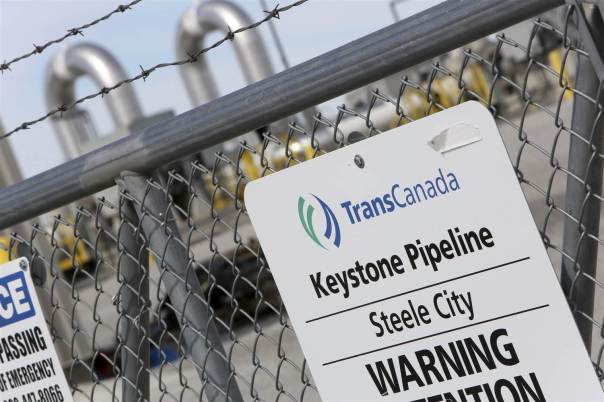 Part of the controversial Keystone Pipeline was shut down Thursday after more than 200,000 gallons of oil leaked in South Dakota, the state and the company that runs the pipeline said Thursday. END_OF_DOCUMENT_TOKEN_TO_BE_REPLACED

In the wake of a massive pipeline leak in northern Alberta, a First Nations group in the area is worried more spills will happen unless environmental standards are tightened.

“If we continue to accept that these types of incidents are the status quo of development we are also accepting the illegal abrogation of the rights and title of First Nations,” Chief Allan Adam of the Athabasca Chipewyan First Nation said Saturday. END_OF_DOCUMENT_TOKEN_TO_BE_REPLACED

One of the largest leaks in Alberta history has spilled about five million litres of emulsion from a Nexen Energy pipeline at the company’s Long Lake oilsands facility south of Fort McMurray.

The leak was discovered Wednesday afternoon.

Nexen said in a statement its emergency response plan has been activated and personnel were onsite. The leak has been stabilized, the company said.

The spill covered an area of about 16,000 square metres, mostly within the pipeline corridor, the company said. Emulsion is a mixture of bitumen, water and sand. END_OF_DOCUMENT_TOKEN_TO_BE_REPLACED

Fire burned for more than 12 hours at a natural gas pipeline after it exploded early Saturday morning near Otterburne, Man., about 50 kilometres south of Winnipeg.

RCMP, responded around 1:05 a.m. to what they’re calling a “loud explosion.”

Witnesses who live close to the scene said it was massive. Paul Rawluk lives nearby and drove to the site. END_OF_DOCUMENT_TOKEN_TO_BE_REPLACED

The area that died from the Apache pipeline wastewater spill near Zama City, Alberta, Canada, in Dene Tha’ territory.

A toxic waste spill, the largest of its kind in North America, has destroyed a chunk of landscape in northern Alberta.

“The substance is the inky black colour of oil, and the treetops are brown,” reported The Globe and Mail in a recent story. “Across a broad expanse of northern Alberta muskeg, the landscape is dead. It has been poisoned by a huge spill of 9.5 million litres of toxic waste from an oil and gas operation in northern Alberta, the third major leak in a region whose residents are now questioning whether enough is being done to maintain aging energy infrastructure.” END_OF_DOCUMENT_TOKEN_TO_BE_REPLACED

CALGARY – The National Energy Board says it’s responding to a spill from Kinder Morgan’s Trans Mountain line near Merritt.

The energy watchdog said it doesn’t yet know the size of the leak, which took place on Crown land but a release from Kinder Morgan says less than 2,000 litres, or 12 barrels, of light crude was detected. END_OF_DOCUMENT_TOKEN_TO_BE_REPLACED

Apache drilling rig in Ladyfern, BC.

Note: Apache is the main owner of the proposed Pacific Trails Pipeline.

Apache Corp. has spilled an estimated 60,000 barrels – or 9.5 million litres – of produced water from a pipeline in northwestern Alberta, one of the largest spills in provincial history. END_OF_DOCUMENT_TOKEN_TO_BE_REPLACED

The total cost of the spill has now exceeded more than $800 million US, or more than five times the previous record for most costly spill on U.S. land.

Hersman also asked if that catastrophic spill, combined with a deadly 2010 pipeline explosion in California, raised questions about the inevitability of future pipeline disasters. END_OF_DOCUMENT_TOKEN_TO_BE_REPLACED