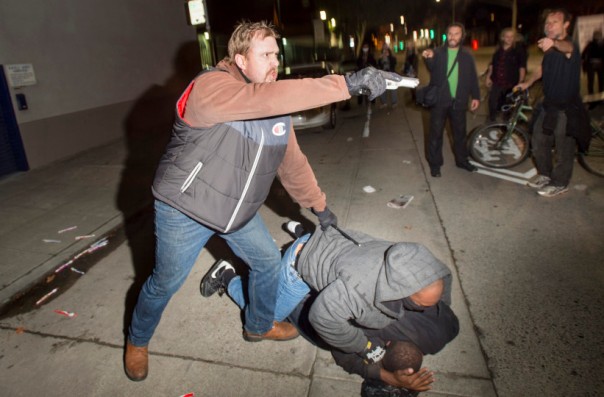 An undercover police officer, who had been marching with anti-police demonstrators, aims his gun at protesters after some in the crowd attacked him and his partner in Oakland, California, December 10, 2014.

There are ongoing efforts by law enforcement agencies to infiltrate, disorganize and destroy social movements. This creates a challenge for anybody who attempts to confront the state’s ability to carry out austerity and repression. To deal with this, we need to develop anti-repression strategies based on actual efforts and tactics by the police and not based on fantasies. It is challenging enough to deal with the efforts of genuine infiltrators, it does us no good to chase after phantoms or, worse, point the finger at somebody who is actually on our side. END_OF_DOCUMENT_TOKEN_TO_BE_REPLACED