Luutkudziiwus to Launch Court Challenge to Prince Rupert Gas Transmission Pipeline that Would Supply Petronas LNG.
October 14, 2015
VANCOUVER – Luutkudziiwus, a Gitxsan Nation House Group, will file a legal challenge in regard to the BC regulatory permits awarded to the Prince Rupert Gas Transmission (PRGT) pipeline that would supply gas to the Petronas LNG plant on Lelu Island which threatens to decimate Skeena River wild salmon. Luutkudziiwus Hereditary Chiefs travelled down to Vancouver to make the announcement today,  while government and industry are gathered at the 2015 LNG Conference in BC.

END_OF_DOCUMENT_TOKEN_TO_BE_REPLACED 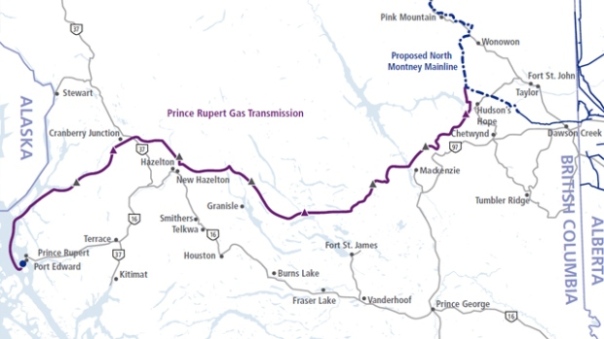 TransCanada Corp. says it has reached project agreements with three more First Nations in northern British Columbia to build a pipeline across the province to a proposed liquefied natural gas terminal on the coast.

Specifics of the agreements weren’t announced, but TransCanada said they provide for annual legacy payments over the commercial life of the Prince Rupert Gas Transmission pipeline plus benefits upon signing and at other milestones. END_OF_DOCUMENT_TOKEN_TO_BE_REPLACED