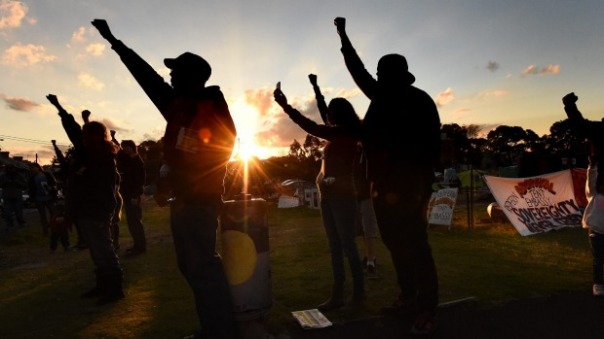 Aboriginal men and women raise their arms in support at the Block in Redfern before negotiations resolved the dispute. Photo: Kate Geraghty

The Redfern Aboriginal tent embassy is preparing to walk away from the Block, claiming it has seized a moral victory from the jaws of legal defeat under a $70 million deal that will see 62 homes built for Indigenous families.

Federal Aboriginal Affairs Minister Nigel Scullion has been brokering the deal with the Aboriginal Housing Company, which will learn in the Supreme Court on Thursday morning when it can evict its Indigenous rivals, the tent embassy protesters who have occupied the historic site for 15 months. END_OF_DOCUMENT_TOKEN_TO_BE_REPLACED 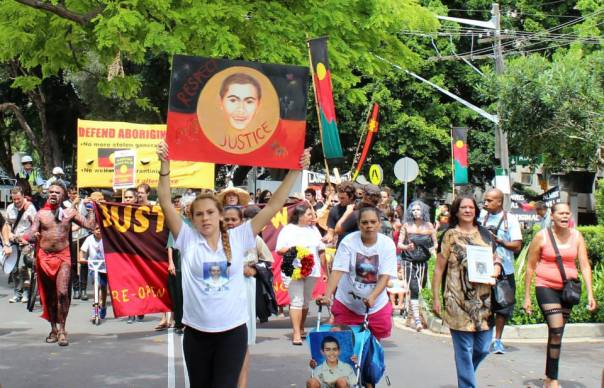 Hundreds participated in march for justice for TJ Hickey in Sydney, Australia, on Feb 14, 2015.

On Feb 14, 2015, hundreds of people participated in the 11th Annual March for Justice for TJ Hickey, a young Aboriginal man who died fleeing from police in Sydney’s Redfern district in 2004.   A large police presence accompanied the rally, with police attempting to seize banners implicating cops in Hickey’s death and assaulting people in the march.  Before the march, police also attempted to restrict the route of the march, and have warned that this will be the last march for justice for TJ Hickey.  END_OF_DOCUMENT_TOKEN_TO_BE_REPLACED

Australia: Protesters scale buildings to stop bulldozing of The Block 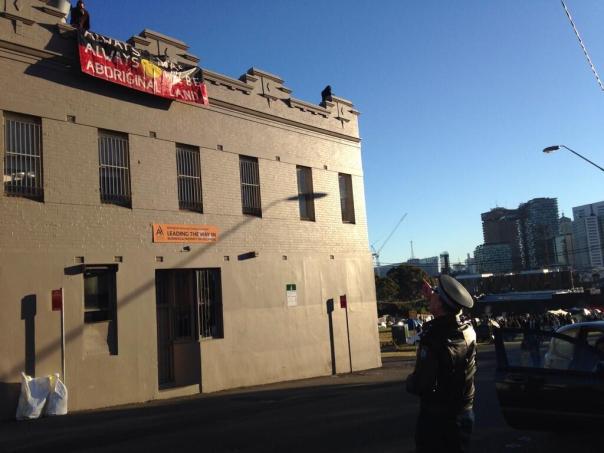 One of several banners at The Bloc, an aboriginal housing site set to be demolished, July 7, 2014.

Two protesters have scaled buildings at The Block in Redfern with banners early on July 7, 2014. Construction work is due to begin today and the protesters have vowed to blockade the site to stop the Aboriginal Housing Commission’s planned commercial redevelopment.

About 200 protesters gathered at The Block in Redfern on Monday as tensions flared over the fear that the site will be bulldozed for redevelopment. END_OF_DOCUMENT_TOKEN_TO_BE_REPLACED

As you approach the Aboriginal tent embassy on the Block in Redfern, inner city Sydney, you see the sacred fire burning within a large circle marked on the ground, serving to cleanse the area. Some ten metres up from the fire, at the edge of the Block, the Aboriginal Housing Company (AHC) has erected a sign that reads: “Warning. Private Property.”
On Saturday, a group of more than 200 protesters gathered in support of the tent embassy that was established on National Sorry Day, May 26 [2014].