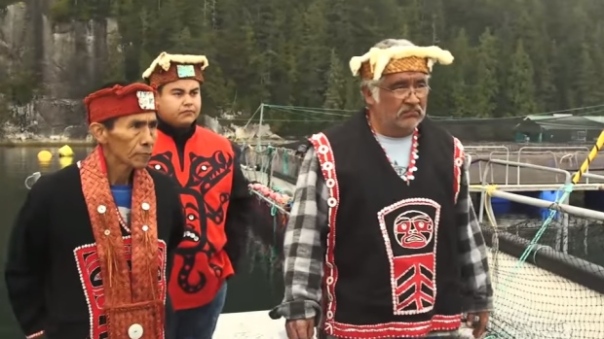 Three hereditary chiefs of the Musgamagw Dzawada’enuxw issued the eviction notice to a fish farm on the north end of Vancouver Island this week. (Tamo Campos/YouTube)

Fish farms along British Columbia’s West Coast have been at the centre of political and environmental battles for years, but this time it’s a two-year-old legal decision that’s behind the string of recent protests by First Nations against the industry. END_OF_DOCUMENT_TOKEN_TO_BE_REPLACED

Video: Fish Farm Resistance Heats Up in “BC”

Confrontations between the salmon feedlot industry and indigenous communities continue to escalate. On August 23rd, the Yaakswiis warriors were arrested in Ahousaht, near Tofino, preventing the transfer of diseased smolts into a net pen. Their elected leadership has signed off on farms yet the community is growing in its resistance to the feedlots that kill their wild salmon.

END_OF_DOCUMENT_TOKEN_TO_BE_REPLACED 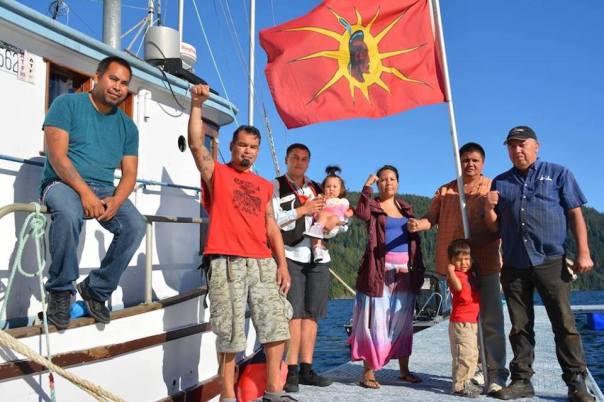 Warriors for Yaakswiis during blockade of fish farm near Ahousaht, Sept 2015.

Update Sept 22, 2015: According to members of the Ahousaht, Cermaq has now removed their fish farm pens from Yaakswiis

Today at 6 am, the Yaakswiis Warriors and their supporters went to witness the removal of the Cermaq fish farm pens from the Yaakswiis site in anticipation of the fulfillment of a verbal agreement made between Lennie John and James Costello of Cermaq would, “at first light,” bring out a barge and tugboat and remove the pens & anchors. After first light came and went, the Yaakswiis Warriors tried numerous times to contact the Chief and Council as well as Cermaq to inquire as to what the hold up was on the arrival of the barge and crew. Chief and Council as well as Cermaq did not answer the calls, no contact was made.