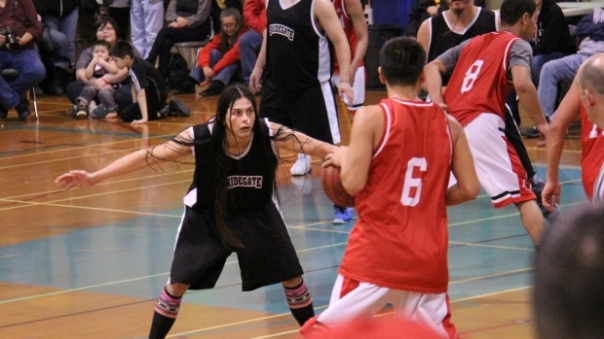 Skidegate Saints’ point guard Desi Collinson plans to press his anti-LNG message off the court at the All Native Basketball Tournament. (Facebook)

A champion Haida sports team is crying foul over liquefied natural gas (LNG) sponsorship of the All Native Basketball Tournament. And the Skidegate Saints fear they’ll be turfed from play for pushing their anti-LNG message.

But it’s a risk Saint’s point guard Desi Collinson is willing to take.

Collinson says his team considered pulling out of the tournament entirely. But the defending champions decided to compete after consulting Haida elders.

Off the court, the Saints plan to wear anti-LNG T-shirts and hand out anti-LNG pamphlets and buttons to the hundreds of indigenous players from coastal B.C. and Alaska and the thousands of fans in the stands.

“No one’s going to be doing that kind of stuff here,” countered Peter Haugen, board president for the All Native Basketball Tournament.  “Someone can do whatever they want outside the building but inside the gymnasium and the arena … we’ve always stopped it. We’re a basketball tournament, right? We’re not a political venue.”

“So many teams and First Nations are against these [LNG] companies and tankers coming through our waters,” says Collinson. “It takes certain people to stand up and say no,”

‘LNG is going to take away from our culture’

This year, more than half the tournament’s top sponsors are LNG companies, proposing major liquified natural gas projects while investing in gas fracking in northern B.C.

Some coastal First Nations are partners in LNG development or have signed benefit agreements. But B.C.’s LNG plans have also sparked opposition over concerns about upstream gas fracking and  the construction of LNG facilities in sensitive coastal habitats.

“I’m concerned about how these mega -projects come in to our beautiful, pristine coast. It’s gonna be a takeover. I ‘m concerned about the coast, about my home,” said Collinson. “LNG is gonna take away from our culture: how we eat, how we harvest on the ocean.”

‘They don’t have to worry about the bloody politics’

“All these chiefs and people elected to band council have to deal politics their whole year,” said Haugen. “This is one week where they don’t have to worry about the bloody politics and just enjoy the games.”

Collinson disagreed, stating the tournament started as a way to get around the ban on potlatches.

“The tournament was created basically on politics,” he said  “We came together to share culture and friendship.”

Haugen also points out that while the Haida team may oppose LNG,  the tournament is taking place on Tsimshian territory, where chiefs have approved LNG projects.

“They can say what they want on Haida territory, but this is Tsimshian territory. The Tsimshian have all signed on to LNG.”

A spokesman for Pacific NorthWest LNG says his company was invited by the organizers of the Prince Rupert tournament to continue a sponsorship they’ve maintained since 2013.

“This year, Pacific NorthWest LNG requested that our corporate branding not be displayed on any materials associated with the tournament — despite our contribution,” said company spokesman Spencer Sproule.

“We wanted the Prince Rupert All Native Basketball Tournament to be about the players, coaches and families that look forward to this tournament every year and not on the opinions of some regarding our project.”

Haugen says no decisions have been made about how to deal with the Saints’ political plans.