← $1.1B class-action lawsuit filed on behalf of former ‘Indian hospital’ patients
Video: Always with the rebels! → 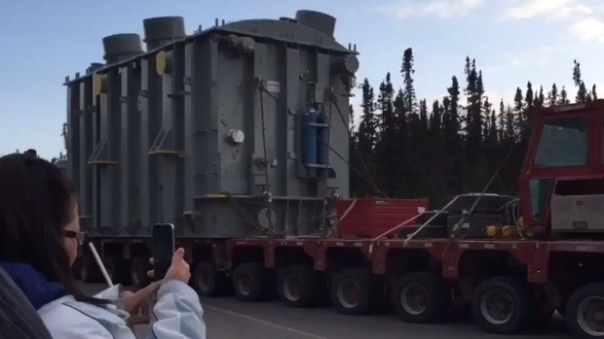 The last of seven transformers for the Muskrat Falls hydroelectric project rolls through at the gate in late August 2017. (Jacob Barker/CBC)

The Canadian military quietly assisted during a large deployment of police officers to Labrador in 2017 amid fears of more protests about the controversial Muskrat Falls hydroelectric project.

Documents obtained by CBC News through an access to information request reveal that the Canadian Armed Forces provided lodging and food at 5 Wing Goose Bay, but stopped well short of giving operational support during a politically sensitive period when officials feared protests may get out of control.

The documents also highlight the extreme level of concern about the movement of massive transformers overland from Cartwright to Happy Valley-Goose Bay, months after protests that disrupted the construction site in central Labrador.

In one letter, Newfoundland and Labrador’s Justice and Public Safety Minister, Andrew Parsons, invokes emergency measures and directs the RCMP to deploy officers “to the extent necessary” to maintain law and order.

“I recognized that it may be necessary to invoke article 9.2 and to seek additional resources by drawing RCMP personnel from neighbouring provinces,” Parsons wrote in a June 19, 2017 letter to the RCMP.

Innu protester being taken away from the Muskrat Falls work site. (Madeline Benuen/Facebook)

The RCMP responded by deploying dozens of officers — ranging from a low of 80 to a high of 135 — and resources from throughout Atlantic Canada to Labrador between June and September, a mission called Project Beltway that cost the provincial government an estimated $10 million.

A smooth shipment, ahead of schedule

The expected protests, however, never materialized and the transformers were delivered ahead of schedule over the roughly 400 kilometres of road from Cartwright to Happy Valley-Goose Bay without any serious incident.

The seventh and final transformer rolled through the gates at Muskrat Falls on Aug. 25, with a small group of protesters looking on.

So was all the security — and cost — necessary?

“It was a relatively uneventful event. Was that because there were police officers there with the detailed plan and strategy? Or would it have been uneventful anyhow? I believe based on what I know the presence of those police officers and the work they did made the difference in this case,” Clark told CBC News.

But why was it necessary to call in the military?

Clark said there’s limited accommodations in the region, and it made perfect sense to request help from another federal agency.

“We didn’t want to find ourselves putting an unreasonable pressure on existing infrastructure and we wanted to make sure that our people were given healthy and safe accommodation,” Clark explained.

“And the way to do that was to simply reach out to our Canadian Forces partners.”

The military agreed to help, but with strict limitations on its role.

In a letter to the justice minister, the then commander of Joint Task Force Atlantic said the military would not assist in any activities of an “operational nature.”

“This includes any manner of forcible control of the civilian population by CAF personnel, use of CAF facilities or equipment to detain any individual placed under arrest, and providing transportation to and from operational policing activities,” Rear Admiral John Newton wrote in a May 31, 2017 letter to Parsons.

In other words, a behind-the-scenes role, ensuring clashes between soldiers and Indigenous protesters, like the ones that made international headlines during the Oka crisis in Quebec in 1990 were not repeated.

A spokesperson for the Canadian Forces said it’s not uncommon for the military to lend assistance to provincial and federal agencies, and cited examples such as the Olympics, meetings of world leaders and even during international drug busts.

The threat level was high because of persistent protests at the Muskrat Falls site in the fall of 2016 that resulted in costly and significant interruptions to construction, court injunctions, arrests and even hunger strikes.

The protests were staged by both Indigenous and non-Indigenous groups and individuals opposed to the project, and forced the RCMP to scramble officers to Labrador in large numbers.

With that as a backdrop, the RCMP and Parsons reached out to the military for assistance, and those concerns reached all the way to Ottawa.

“There is reason to believe that between June and September of 2017 protest activities will resume,” Parsons wrote in a May 31, 2017 letter to Ralph Goodale, the federal minister of Public Safety.

Parsons was not available for an interview.

← $1.1B class-action lawsuit filed on behalf of former ‘Indian hospital’ patients
Video: Always with the rebels! →