#Shutdown Canada actions have taken place in some 23 cities and towns across the country with the intention of causing economic disruption.  The action was called by grassroots Natives and organized primarily through social media to highlight the cases of over 1,100 missing and murdered Indigenous women.

On one of the main Facebook event pages for #Shutdown Canada, over 7,000 people indicated they would be attending.  But on the day, the numbers of people participating across the country probably did not even reach 700.  The Aboriginal People’s Television Network (APTN) reported on the protests with the rather uninspiring headline “So-called Shutdown Canada protest fails to live up to its name.”

In Vancouver, BC, approximately 100 people rallied at Clark and Hastings Streets, blocking one of the main entrances to the Port of Vancouver in what appears to be the largest of the nation-wide actions.  In Winnipeg a small group blocked a major roadway, while in Regina about half a dozen people blocked a railway line.  In Montreal about a dozen people briefly blocked a major intersection before entering and briefly occupying a Royal Bank of Canada outlet.

In Toronto, it is unclear how many people took part in #Shutdown Canada, but there is a video circulating with hundreds of people doing a “die-in” on downtown streets, but the video is from a different protest held in December 2014.  Initial reports on social media indicate the Feb 13, 2015, event had a small turnout.

On Dec 2, 2013, a national “Shutdown Canada” action was also called, at that time in solidarity with Mi’kmaq land defenders resisting shale gas exploration on their territory in New Brunswick.   This event also did not see a major mobilization across the country, and in fact most “national days of action” over the last two decades–whether called by grassroots Natives or Indian Act chiefs–have failed to do so.  The most notable exceptions to this were the rallies called by Idle No More in 2012-2013 (and which involved both grassroots Natives and Indian Act chiefs, who used their resources to mobilize Natives as part of their power struggle with the federal government). 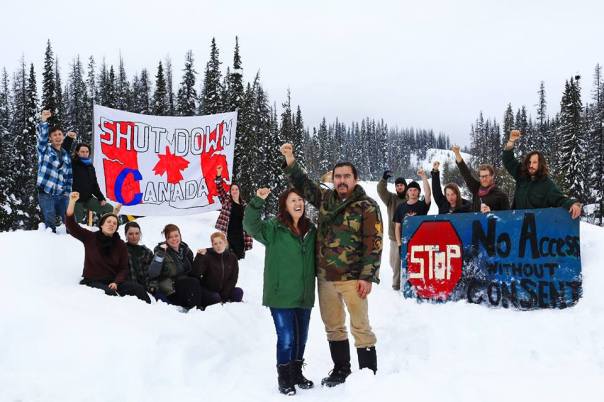 The #Shutdown Canada actions occurred the day prior to national mobilizations to remember and honour missing and murdered Indigenous women, an annual event that has been ongoing since the 1990s and now occurs in cities and towns across the country, involving several thousand people.

While the timing of the #Shutdown Canada actions is clearly connected to the Feb 14 mobilizations, call outs for the day of action encompassed a broad array of issues, ranging from missing and murdered women to anti-pipelines struggles, defence of the environment, as well as new anti-terrorist legislation.  This attempt to broaden the action may have instead diluted its impact, and along with cold weather and an overall lack of confidence in the organizers, contributed to much smaller turn out than had been anticipated by organizers.  APTN reporter David Ward touched on this lack of confidence, stating that “Even now, we don’t really know for certain who was organizing the so-called Shutdown Canada event.”

Below is the press release as well as media articles.

One of several posters promoting the Feb 13, 2015 actions.

FOR IMMEDIATE RELEASE:
WHERE: Nationwide
WHEN: Friday, February 13th 2015

Grassroots collectives are organizing nationwide for a day of action to #ShutDownCanada.  Through the use of a diversity of tactics the goal is to significantly impact the Canadian economy for one whole day.

What is the goal out of #ShutDownCanada?

To remove the veil or illusion of the Conservative government’s “Action Plan” that is being touted as a strong economic stance for Canada in the global market. Economics being the key word and base of why there is such a blatant disregard for human rights and our environment. Bottom line is that the government is responsible for allowing multiple injustices including, but not limited to:

• The refusal to have adequate and meaningful investigation for missing and murdered indigenous women exemplifies Canada’s systemic racism and permits it to continue.
• The ever increasing expansion of tar sands extraction and how this “development” is destroying a people (Dene), their way of life and the entire ecosystem needed for their survival. Not to mention the multitude of rare cancers and diseases which are byproducts of tar sands destruction.
• Pipeline construction which equals loss of jobs being exported topped with importing workers from other countries to take Canadian jobs (Action Plan) without the consent of First Nations.
• Issuing grants and licenses for open pit mining even after the Tshilqot’in Supreme Court decision, and the Mt Polley tailings pond breach without any real concerted effort in clean up.
• Fractured gas drilling and the serious intentional misleading of the truth of how this impacts our water supply.
• Site C dam construction and why it is being constructed, not to mention who it is displacing and how they never had any consent from First Nations to move forward.
• The destruction of wild salmon habitat, open net feedlots and fish farming with other countries in our waters destroying the seabed ecosystem and wild salmon stalks.
• Unconstitutional agreements such as FIPA, not to mention now even more so privacy laws are being changed without your consent which goes in direct violation of your actual charter of rights and freedoms.

While the issues are many and varied throughout different regions it’s all interconnected and it is this corrupt government that is responsible. The only way for the people to get the attention of this government is to target their pocket books. That is the reason to #ShutDownCanada. 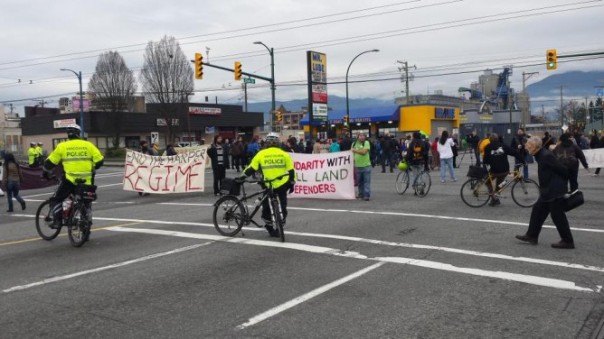 Protesters blocked the Port Metro Vancouver entrance at Hastings and Clark Drive earlier today, with about 100 people demonstrating against everything to do with Prime Minister Stephen Harper and his government.

“What they talk about all the time is economics, economic development, how we’re going to maintain Canadian lifestyle and stuff like that,” says Dan Wallace, who’s among today’s protesters.

“But it’s more than that. There’s a lot more that’s at stake, so we want to make sure that we’re showing people that you can do it as a small group — even a few people,” he tells us.

Demonstrators have been holding up signs reading “Native lives matter” and “Fracking = Genocide” “#InquiryNow” and “Justice for missing and murdered women.”

Some First Nations and supporters are hosting what they call “Shutdown Canada” — 22 events across the country that plan to cause disruptions.

Demonstrators say they’re angry about political and economic systems in Canada, and their belief indigenous voices are being silenced.

#ShutDownCanada action in Regina fails and succeeds at the same time. 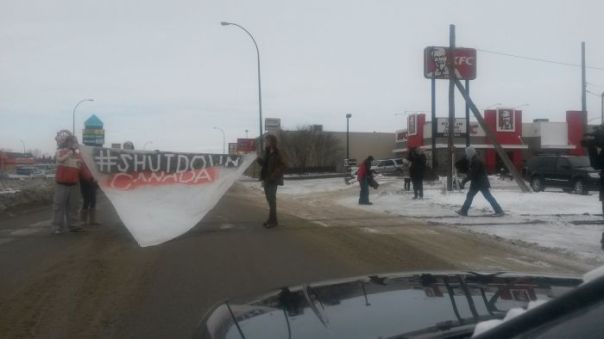 The plan for Regina was planned with safety of participants  in mind. The plan was to activate the rail signalling system at the Albert Street crossing, to safely block the street using the rail crossing while also delaying trains down the line.  Banners from the light platforms over the street were also part of the plan, but that also didn’t happen.

I went to trigger the signal, it didn’t start, nothing, I realized the signalling system had been deactivated, and the plan had to change.

Then suddenly I was surrounded by cops. They knew everything. The RCMP told me they had arranged for the line to be stopped and the signalling system to be deactivated. I can only speculate as to how they found out, there are many ways they could have found out.

But what I know is they were ready and waiting.

They could have charged me with a lot of things, but they didn’t.

I walked across the street to where people were waiting for the action to start, to tell them it wasn’t starting. I was surrounded by media. Every major media outlet was there, we had generated a lot of interest leading up to the action, and now I had to explain that it wasn’t happening, or at least not happening the way that was planned.

So we just blocked the street off and on the old fashioned way, without the signalling system, until police intervened once again.

I haven’t watched any of the news stories yet.

We succeeded because police had to block the line to prevent the action we originally planned, and we also blocked Albert Street off and on for quite awhile before they stopped us.

But it was not the success it could have been. 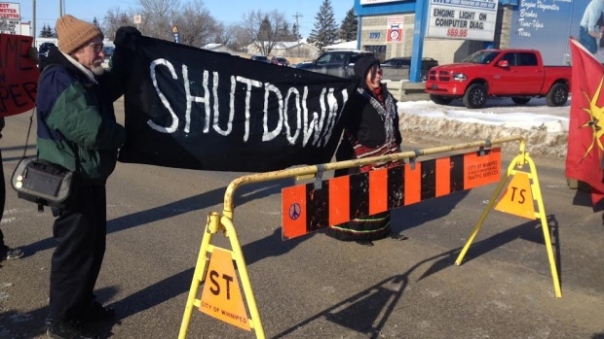 They wanted to shut down Canada’s economy, but protesters in Winnipeg only managed to block part of a road.

Local organizers of Shut Down Canada, a protest to demand an independent inquiry into Canada’s cases of missing or murdered indigenous women, called on people to gather at the western edge of Winnipeg on Friday.

Police blocked the westbound lanes of Portage Avenue at St. Charles Street, near the Perimeter Highway, for the event, which wrapped up in the afternoon.

Tina Spence, who came to the protest to raise awareness of missing and murdered indigenous women, said she hopes it will lead to a national inquiry on the issue.

“Well, somebody’s got to hear us…. We’ve got to keep doing this so somebody hears what’s taking place,” she said.

“It’s been going on for too long already. Too many women, girls, men are missing, you know? Nothing’s really ever done about it.”

Spence said her mother was killed almost 44 years ago and the case was never solved.

Communities across Canada were urged to blockade railways, ports or highways — “don’t buy, don’t fly, no work and keep the kids home from school” —  to impact the Canadian economy as a way to get Harper’s attention.