What the white man seeks to destroy and what the non-profit industrial complex is financed to carry out: the destruction of the Indigenous Warrior culture. This is not news to native people, however, this reality is all but lost on today’s white “left”. [Further reading: Part II of an Investigative Report into Tar Sands Action & the Paralysis of a Movement, September 19, 2011]

The following comment is from a film director who just returned from the camp at Standing Rock. What she witnessed is the historical paternalism that is reminiscent of the ‘Indian schools’ where proper comportment was wholly identified as the ability to assimilate into Anglo structures. We thank this person for recognizing and  sharing what she witnessed. That this took place on native land – shows egotism and white paternalism still very much exists, is being taught/modeled (via NGO “training”/*NVDA dogma), has no bounds – and no shame. (*non-violent direct action)

“I just returned from the camp at standing rock and I can report that this[referencing the article: All Eyes On Dakota Access – All Eyes Off Bakken Genocide] is exactly what has happened. I sat in on the first two non violent action trainings brought into the camp to help teach protestors how to “de-escalate” even to the point of pulling young men (warriors) aside and chastising them (gently of course) for their anger. They were also told not to wear bandanas over their faces but to proudly be identified. A chill went up and down me. The national guard was brought in a couple of days ago to “help with traffic” and now today protestors (called ” protectors”) were arrested by guards in complete riot gear. This will not end well.” 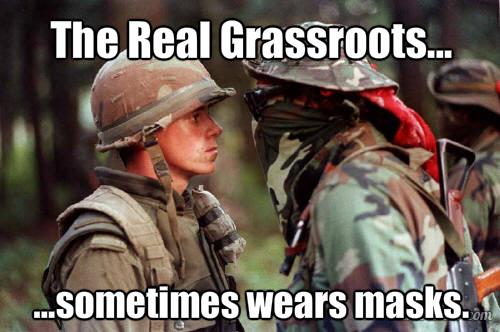 The following is an excerpt from the report: All Eyes On Dakota Access – All Eyes Off Bakken Genocide, published September 13, 2016:

One would be hard pressed to find on any website such extensive NVDA (non-violent direct action) dogma as found on the #NoDAPL Solidarity website (created on August 29, 2016 by Nick Katkevich, noted liberal strategist who is the co-creator of the group FANG – Fighting Against Natural Gas). Especially in light of this website being meant to be interpreted as representative of Indigenous resistance. Yet, Indigenous peoples do not espouse NVDA as an ideology – this is the ideology belonging to and peddled by the NPIC. The fact is, Indigenous peoples retain a deep-rooted (and enviable) warrior ideology – deeply ingrained in the Indigenous culture. This is what the NPIC seeks to destroy. Because of the arrogance and paternalism of those within the NPIC, they even believe they will be successful in doing so. This site is sponsored by Rising Tides North America (RTNA), which can be identified under the “Friends and Allies” (North America) section on the 350.org website. Many view RTNA as a sister org. to Rainforest Action Network, with a more radical veneer, the common link being Scott Parkin: “Scott Parkin is a climate organizer working with Rainforest Action Network, Rising Tide North America and the Ruckus Society.” (see the multitude of Ruckus documents/links on screenshot below). [Source]

Further irony arises when one takes note of the Martin Luther King quote on the “indigenous led resistance” website (see screenshot above). Ask yourself why Indigenous resistance would choose to quote MLK (a long-time favourite co-opted and sanitized icon of the NPIC), rather than a quote from their own warriors.

Leave it to white “leftists” to retain their unwavering belief they have the right and superior knowledge to manage/shape how Indigenous struggles should be led. This is the same “left” (funded by the establishment) that has failed at virtually everything except for the main task assigned by the elites they kowtow to: keeping current power structures intact.

Although the white left would never believe it to be true, the Indigenous Peoples have a wisdom and knowledge the Euro-Americans lack altogether. They are not part of our depraved society. So why would wise people succumb to the whims of the NPIC? There is perhaps a very good reason why the tribes standing with Standing Rock Sioux Tribe are not opposed to the white left saturation who will never fail to rush in front for the cameras: to place them in front to stop the bullets from being fired (“Don’t Shoot”). Indigenous peoples have been subjected to horrendous racism since the first European colonizers arrived, which continues to this day. The reality being white activists have no fear of being shot and killed by police regardless of their actions, whereby the same actions are opportunities for the state to kill natives, blacks and minorities.

For media sensation and photographs that will travel the globe, those at the helm of the NPIC ensure that publicly, Indigenous Peoples most always appear in the forefront – all while strategizing behind closed doors to take leadership. When they cannot do so, they vacate the movement, work to marginalize and if possible bury, the legitimate work they were unable to take over. The 2010 People’s Agreement (Cochabamba, Bolivia), led by Indigenous peoples, is an excellent example of just this. The white man has proven incapable of involvement if he is not soon in charge. He has proven himself incapable of following, learning, listening… standing behind. Keeping his mouth closed. The ugly reality is that these are racist, fascist organizations, only there to protect current power structures and count bodies. Social media metrics are far more important than disposable people.

“When the Enviros show up, their literature and banner is strung up against the wall. We are pushed into our place. Most have had a bad taste from wasicu hypocrisy.”  — Harold One Feather

Those at the helm of the NGOs that comprise the NPIC will not be joining land defenders that are willing to die to protect their land, people, culture and ancestry. For these cowards, the brand is too valuable, the price too high. The warrior culture too strong (unruly savages!) to contain. Instead they will throw a few crumbs and send their well-intentioned youth followers as the sacrificial lambs to test the waters. The Indigenous that live within the Bakken are the only credible organizers in opposition to the frack oil developments. It is an understood but unspoken reality that within this resistance, people are going to die.

“Much of the camp’s rhetoric is of the “Non-violent Direct Action” type. Lock your arm to this piece of deconstruction equipment and take a picture with a banner for Facebook. But the Warrior Culture that is so rich in Lakota memory seems to counter a lot of the liberal, non-violent, NGO types. Comrades saw what happened in Iowa, heard about the $1,000,000 in damage and got inspired. I wouldn’t say that it was publicly celebrated because the camp’s tactic of “Non-violence” is the image they want to perpetuate. Like I said, it is a tactic… not everyone thinks that is what we need to dogmatically stick to. It is one thing to use Non-Violence as a rhetorical device in corporate media to spread your inspirational actions but it is another thing to preach it as your dogma in your private circles and use it to stop material damage to the infrastructure of ecocide. I see the former being invoked much greater than the latter.” — A CONVERSATION ON THE SACRED STONE CAMP, Sept 4, 2016

All eyes ON one (single) pipeline.

All eyes OFF the acceleration of genocide of Indigenous peoples in the Bakken.

All eyes OFF Bakken fracking oil.