Natural Resources Minister Jim Carr suggested Thursday Canada is prepared to deploy the military against anti-pipeline actions deemed “not to be peaceful,” raising the possibility the country could face a scenario last seen during the Oka Crisis in 1990.

Carr made the statement in response to questions from business leaders in Edmonton worried the events unfolding in North Dakota near the Standing Rock Sioux Tribe reservation could be replicated through the mounting opposition to the Kinder Morgan Trans Mountain project which was recently approved by the Liberal government of Justin Trudeau.

“If people choose for their own reasons not to be peaceful, then the government of Canada—through its defence forces, through its police forces—will ensure that people are kept safe,” said Carr, according to a video of his statements posted by BNN. “We have a history of peaceful dialogue and dissent in Canada. I’m certainly hopeful that tradition will continue. If people determine for their own reasons that that is not the path they want to follow, then we live under the rule of law.”

Under existing law, the federal government has no ability to deploy the military into a domestic situation without first being asked by the provinces through an invocation of Aid to the Civil Power under the National Defence Act. Even if a province asks for military assistance, the federal government has no control over how the deployment unfolds because authority would rest solely with the Canadian Forces’ Chief of Defence Staff.

Carr did not retract his statement on the possible use of the military in a subsequent interview with CBC News Friday morning saying only he did not intend it to be interpreted as a “threat.”

The Trudeau government also did not back away from the suggestion during question period Friday when NDP MP Randall Garrison raised the issue.

“What reckless, irresponsible and incendiary language from the minister and only two days since they approved this pipeline,” said Garrison in a question directed at Defence Minister Harjit Sajjan. “Will he remind his colleague, the Minister of Natural Resources, that if he is truly concerned about the rule of law he should know that in this country the federal government has no such authority to use our military against pipeline protesters?”

The question was fielded by Transport Minister Marc Garneau who did not deny Ottawa is prepared to use the military.

“We will always respect the right of Canadians to protest when they do not agree with something. They have the right to do it, they feel strongly about it, and we are confident that they will do so peacefully,” said Garneau.

Carr’s office issued a statement to APTN indicating the minister may be beginning to back away from his comment.

“Minister Carr did not mean to suggest action would be taken against the protesters,” said Alexander Deslongchamps, spokesperson for Carr. “We know that not everyone agrees, and the right to peaceful protest is a foundation of our rights and freedoms.”

Armoured personnel carriers on highway near Kanesatake during the 1990 Oka Crisis.

Indigenous Affairs Minister Carolyn Bennett’s office did not provide comment as of this article’s posting.

Kanesatake Grand Chief Serge Simon, whose Mohawk community was at the centre of the Oka Crisis which saw the military move into its territory to end the standoff, called for Carr’s resignation over the statement.

Simon said his community still feels the effects of the Oka Crisis despite the amount of time passed since the summer of 1990 during the Battle of the Pines triggered by the Village of Oka’s desire to expand a golf course over Mohawk burial grounds.

“There is still that trigger people feel even 26 years after the Oka Crisis and this guy wants to do that again, he wants to invoke calling the military in on Canadian soil?” said Simon. “Minister Carr’s statements are highly irresponsible.”

Simon said he plans to raise the issue during next week’s Assembly of First Nations chiefs meeting in Gatineau, Que.

The Indigenous anti-pipeline treaty alliance now has over 100 participating First Nation and Tribal signatories. The alliance has held signing ceremonies in Quebec, Manitoba and British Columbia. The alliance was formed to create coordinated opposition against the Trans Mountain project, Enbridge’s Line 3 expansion, which also received Liberal approval, and TransCanada’s proposed Energy East pipeline along with Keystone XL, which was rejected by U.S. President Barack Obama but could face resurrection under the Donald Trump presidency.

Grand Chief Stewart Phillip, president of the Union of B.C. Indian Chiefs, is also part of the alliance. He said Carr’s statements are meant to intimidate.

Phillip said Indigenous people in Canada have faced the military in the past and are not intimidated by the prospect of it happening again.

“We are certainly not the least bit frightened or intimidated by such bellicose statements,” said Phillip. “We faced off with the Canadian armed forces in the past and we know the outcome of that. It is an incredibly stupid thing to say.”

Quebec has been the only province to invoke Aid to the Civil Power to deal with a civil disturbance since the Conservative government of Brian Mulroney replaced the War Measure’s Act with the Emergencies Act in 1988 to limit Ottawa’s powers in deploying the military domestically.

While Ottawa has no official role under the law in such an event, it is responsible for the total cost of this type of deployment.

A signal from Ottawa suggesting the Trudeau government is fine with the political implications of a move to invoke Aid to the Civil Power may give some provincial finance ministers pause when faced with the extensive police costs associated with prolonged disturbances caused by opposition to natural resource projects whenever Indigenous rights are at play. 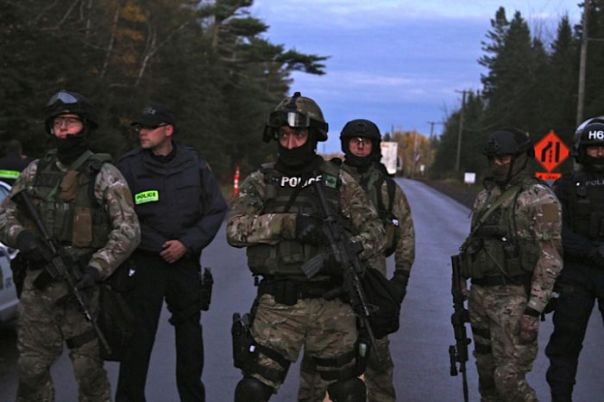 The months-long, Mi’kmaq-led, anti-shale gas demonstrations throughout 2013 in New Brunswick cost the cash-strapped province an extra $9.5 million in policing costs. While the military was never directly involved in the events which unfolded near Elsipogtog First Nation, it did provide the RCMP with field box lunches and space for a staging area at CFB Gagetown and the CF Moncton detachment through a Request for Canadian Forces Assistance.

The military’s counter-intelligence unit was involved in monitoring the events in New Brunswick, but it’s unclear whether it shared any data with the RCMP.

The Mounties seized three, single shot bolt-action hunting rifles, including one fitted with a bayonet, during a raid on Oct. 17, 2013, that saw 40 arrests and the torching of several police vehicles. The Mi’kmaq Warrior Society said at the time the rifles were purely for hunting and protection from black bears. 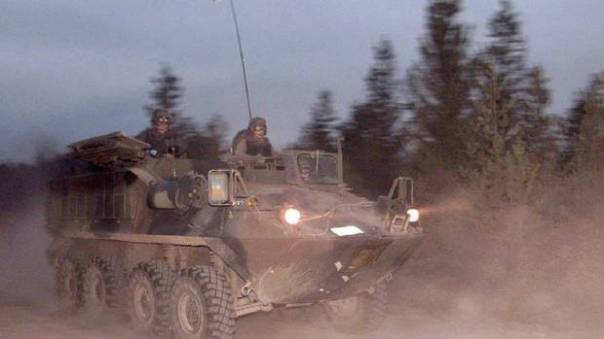 Bison APC’s supplied by the Canadian military, along with their crew, to the RCMP during the siege at Ts’Peten (Gustafsen Lake, BC) in 1995.

The Canadian military’s last serious involvement in a conflict triggered by an assertion of Indigenous rights came in 1995 during the Gustafson Lake standoff where warriors dug in to protect Sundance grounds. The military provided the RCMP with armoured personnel carriers and drivers during the conflict which saw police and warriors exchange tens of thousands of rounds in firefights.

British Columbia did not invoke Aid to the Civil Power, but did request military assistance.

During the Six Nations reclamation of the Douglas Creek Estates in Caledonia, Ont., in 2006, there were calls for military intervention, but Ontario stuck with its provincial police force to deal with the situation which simmered to a peaceful détente.

The military at the time was on site gathering intelligence and preparing contingency plans for a “possible, yet improbably, domestic operation,” according to military historian Timothy Winegard who wrote about the event in a book called, Blockades or Breakthroughs? Aboriginal Peoples Confront the Canadian State, 1968-2010.

The nature of Indigenous resistance in Canada has change since the 1990s when the image of the warrior with a rifle dominated. Now, especially since the Idle No More movement, the weapons are the drum, song, sage and the eagle feather.

The one image that came to define the events at Elsipogtog—despite the flaming police cars and seized rifles—was the photograph taken by APTN National News journalist Ossie Michelin of Amanda Polchies kneeling and holding a feather in the air before a line of RCMP officers.

That image was replicated across the border in North Dakota during the Oct. 27 police raid against a camp set up by demonstrators, known as water protectors, to launch rolling blockades aimed at slowing down construction of the Dakota Access Pipeline. During the police operation, APTN cameras captured the arrest of two women who kneeled like Polchies did three years earlier as the police line moved toward them.

During an assault with a water cannon and tear gas launched by North Dakota police behind concrete barricades and concertina wire just north of Backwater Bridge by the Oceti Sakowin Camp on Oct. 20, APTN cameras captured drumming, singing, and a ceremonial dance with shakers performed by water protectors during pauses between volleys.

No weapons have been brandished by water protectors in North Dakota throughout the months-long demonstrations.

The last major action launched last Thursday by water protectors ended with prayer, song and the scent of sage at the foot of Turtle Island hill, which sits about a kilometer from the Oceti Sakowin Camp, the nerve-centre of the anti-pipeline movement.

The ongoing events at Standing Rock—where hundreds of Tribes and First Nations across the country have backed the Standing Rock Sioux in their fight to stop construction of the Dakota Access Pipeline underneath Lake Oahe, a reservoir on the Missouri River, from where the Tribe draws its water—has electrified opposition to new oil developments, said Phillip.

“It is the backdrop to all of this. I mean, this is an epic battle, water versus oil, and at the end of the day, it is about survival or extinction,” said Phillip. “I think people are becoming more and more aware that climate change and global warming is something that should be of grave concern to everyone….Indigenous people have been climate change refugees for a decade, at least, given the evacuations of our communities in the north by fire and flooding. We pretty much lost the winter roads and the ability to resupply our communities, so food security is threatened and the price of food in the north is outrageous because everything must be flown in.”