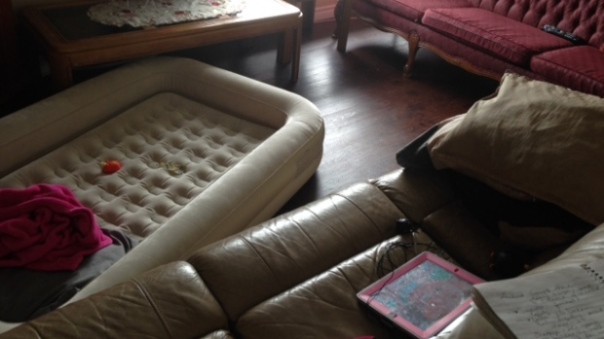 Packed into living rooms and sleeping on sofas, people in Elsipogtog are crammed into two and three-bedroom homes, waiting for more housing to be built. (CBC)

People in Elsipogtog are calling for immediate action on what they say is a worsening housing crisis, as many band members live in crowded and deteriorating homes while they wait for the council to assign them a place to live. END_OF_DOCUMENT_TOKEN_TO_BE_REPLACED

A three-bedroom house on Pikangikum First Nation in northwestern Ontario burned to the ground Tuesday night. Three children and six adults were killed in the blaze. (Kyle Peters)

Pikangikum First Nation’s chief says a house fire that killed six adults and three children has brought things to a standstill on the northwestern Ontario reserve.

Kangok and his wife Salome represent one of 102 households waiting on a social housing unit in Igloolik. More than 3,000 households in Nunavut are estimated to be homeless and waiting for social housing, according to the Nunavut Housing Corporation. (John Van Dusen/CBC)

‘The waiting period is such a long time to finally get housing. I’m getting tired’

Without a roof over his head, 70-year-old Theo Kangok built his own.

Two years ago the senior gathered materials from the dump and parts from old shipping containers and built a cabin along the rocky shores of Igloolik, Nunavut.

It’s where he and his wife live in the warmer months and he says, they’re not the only ones.

The island of Igloolik is home to around 1,800 people, not enough homes and plenty of frustration. END_OF_DOCUMENT_TOKEN_TO_BE_REPLACED