Statement on Provocateurs, Informants, and the conflict in New Brunswick

In the aftermath of the RCMP raid on the anti-fracking blockade in New Brunswick, in Mi’kmaq territory, there has emerged a conspiracy theory that the six police vehicles set on fire were the act of police informants acting as agents provocateurs.

In particular, one individual has been identified and publicly labelled a police informant: Harrison Friesen.  It has been implied that he, along with one or two others, were responsible for several Molotov cocktails thrown at police lines and the torching of the police vehicles.

We saw similar theories promoted following the Toronto G20 protests in 2010, during which four cop cars were burned in the downtown streets.  Conspiracy theorists immediately claimed that the police set their own cars on fire to justify their massive police operation and violent repression of protesters.

Not a single piece of evidence has ever emerged to justify these theories about the G20 protests, and they remain nothing more than speculation.

Harrison Friesen first came to prominence in 2010 as the leader of Red Power United (RPU).  At that time, he released a public statement against the arson of a Royal Bank of Canada branch in Ottawa.  I sent his group an email stating that I disagreed strongly with his denunciation of the attack.

Just prior to the Toronto G20, Harrison set up a meeting with agents of the Canadian Security Intelligence Service (CSIS), who had requested an interview with him (a common practise of CSIS).  Unknown to CSIS, Harrison had also contacted reporters from the Aboriginal Peoples Television Network (APTN), who secretly filmed the meeting.

During the APTN broadcast, my email was flashed across the screen.  The implication was that I was involved in the RBC attack.  The email was supplied to APTN by Harrison.

A dirty trick, approaching the level of informant? Yes.  But it does not prove that Harrison is one, only that he is an opportunist.  Over the last three years, more people have come forward with allegations against Harrison, most of which implicate him as a movement hustler and abusive towards women.

In fact, despite these new allegations against him, including a widely circulating meme accusing him of being both a police and CIA informant (!), there is no evidence that Harrison is, in fact, an informant.  It’s all speculation.

To back up the claim that police would participate in burning their own vehicles (again, to justify their repressive actions), conspiracy theorists have found an actual example of the RCMP blowing up an “oil installation.”

On October 15, 1999, the RCMP blew up an unused shed belonging to the oil corporation AEC, in northern Alberta.  The bombing had no effect on oil production and was intended to bolster the credibility of an informant: Robert Wraight, aka Agent K4209. 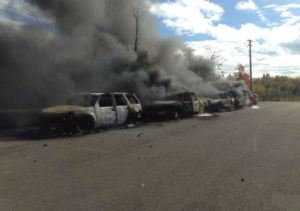 The bombing was part of Operation Kabriole, the RCMP’s effort to entrap Wiebo Ludwig.  Wiebo and his family had been a thorn in the side of the oil industry due to their determined opposition.  The police worked closely with oil corporations, including AEC, to neutralize the Ludwigs, who were suspected of carrying out a campaign of sabotage against the industry.

As part of the resistance against oil companies, roads had been blocked, pipelines drilled with holes, and facilities damaged.  None of these scores of sabotage attacks were reported in the media, although they are documented in the book Saboteurs, written by Andrew Nikifouk and published in 2002.  It should be noted that these low-level attacks actually impacted industry, while the RCMP’s bombing did not.

According to those re-posting this old bit of news, if the RCMP would blow up an “oil installation” in northern Alberta, what’s to stop them from torching their own vehicles in New Brunswick?

The question is: for what purpose?  In the case of the Alberta bombing, it was part of an extensive effort to insert an informant into the Ludwig family circle.  In New Brunswick, we are told, it was to justify the acts of repression carried out by the RCMP.  But those acts of repression were already in motion, long before the police cars were set on fire.

In their own statements, the RCMP justify their raid on the basis of alleged threats made to SWN employees, the presence of firearms, and general concerns for public safety.

If police are going to go through the efforts of staging an attack on their own resources, it is only logical they would do this prior to a raid thereby justifying the raid itself.  It is highly unlikely they would instruct an informant to do so after the raid has begun, a raid already justified by “public safety” concerns, etc.

In fact, the burning of the six police vehicles appears to be a response to the raid.  But there are those who seek to dampen the fighting spirit of our warriors by implying that any act of militant resistance is a police conspiracy.  Some of these people are pacifists, ideologically committed to nonviolent acts, while some are conspiracy theorists who see the hand of the “Illuminati” behind any acts of resistance.

This is what one radical journalist, an eyewitness present during the conflict on Oct 17, stated about the burned cop cars and the theories of who burned them:

“To all the people spreading misinfo about provocateurs at Elsipogtog, listen up.  RCMP cars were not burned by provocateurs.  It was an expression of rage by an angry crowd sick of being trampled by the government.  People put their cameras away as the cars were being lit, as to not incriminate comrades and cheered every time one went up in flames.  Hundreds of people witnessed this,  so drop all the propaganda and snitch jacketing and raise your glass to all the brave peeps who risked life and limb to protect your fuckin water.” – The Stimulator, Oct 18, 2013

When we consider the 1999 RCMP bombing of an unused shed in northern Alberta, we should not forget that there were scores of sabotage attacks carried out against the oil industry prior to this.  Were these all the result of police conspiracies?  Highly unlikely.  It was due to their inability to stop these attacks that police resorted to the bombing in order to insert their informant.

In the past, it was common sense that you did not label a person a police informant without substantial evidence.  Extraordinary claims demand extraordinary evidence.  Informants and police infiltrators have been exposed in the past based on real evidence, through court transcripts or intercepted communications with their handlers, for example.

At this point, Harrison is being made a scapegoat by those pacifists and conspiracy theorists who are either opposed to militant resistance on principle, or who see a government conspiracy behind any spectacular event.

So far, we have no evidence that Harrison Friesen is an informant or that any agents provocateurs set the cop cars on fire in New Brunswick.   And until such evidence is produced, those circulating unsubstantiated claims should cease doing so.