Two years after the Mount Polley disaster, Secwepemc Women’s Warrior Society and Ancestral Pride had an action today to show Imperial Metals that we will escalate resistance until they cease and desist all mining operation in our Indigenous territories. Imperial Metals ordered thirty police offers to violently assault Indigenous women and supporters, with four arrests and many bruised bodies. But our spirits are high and we know the world is watching, we have support from around the world. We are holding their responsible for the violence against Indigenous lands and Indigenous women. We sent a message to investors and shareholders, including President Brian Kynoch who was in the office, that they are violating our Indigenous Rights and Title and violating our free, prior and informed consent. 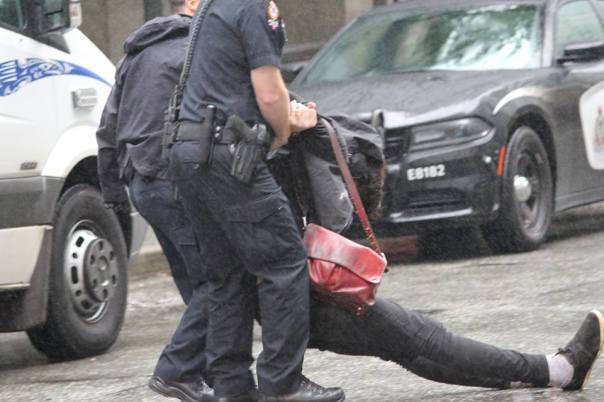 According to Kanahus Manuel, “Vancouver is a hub for mining around the world. This industry is violating peoples and lands around the world and we join Indigenous peoples all over with our war cry to protect our homelands. Our actions will continue until Mount Polley and Imperial Metals are out of our territory. The Indigenous nations are united to get industry out of our territory.”

Vancouver — Police say four people have been arrested following a protest against the Mount Polley mine at its head office in Vancouver.

Montague says four people were taken into custody for allegedly pushing and shoving people inside the office.

Another 15 to 20 people stayed outside of the building and continued what Montague calls a loud, but lawful demonstration.

The four arrested were all released without charge after protesters left the site.

The protesters say in a release that they were marking the second anniversary of a spill at the Mount Polley mine in the B.C.’s Interior, where a tailings pond collapsed, sending millions of cubic metres of waste into nearby waterways.