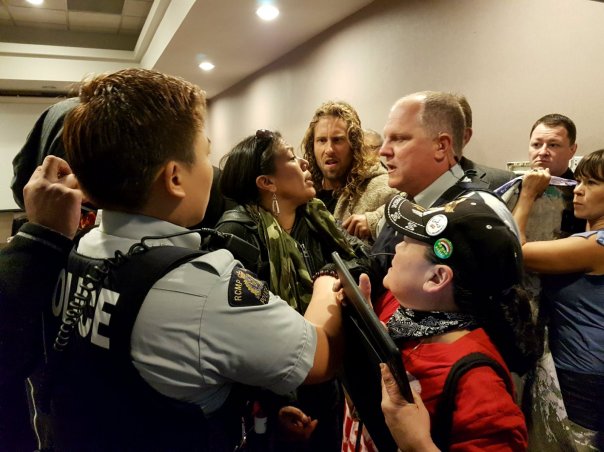 Protesters face off with RCMP officers outside the annual general meeting of Imperial Metals in Coquitlam B.C. on May 25, 2017. Photo by Bethany Lindsay

By Bethany Lindsay, National Observer, May 25 2017

Before the first protesters had even arrived at the annual general meeting of Imperial Metals, RCMP cruisers were already pulling up behind the Metro Vancouver hotel where the mining company’s investors were set to convene.

END_OF_DOCUMENT_TOKEN_TO_BE_REPLACED

A dozen RCMP officers have been called to the scene. (FarrahMerali/CBC)

One person has been arrested, and three others forcibly removed after entering Imperial Metals’ annual conference at the Coquitlam Executive Plaza Hotel.

At least a dozen RCMP officers were called to the scene after a group of protesters gathered outside the hotel and entered one of the conference rooms.  END_OF_DOCUMENT_TOKEN_TO_BE_REPLACED

Video of arrests at Imperial Metals occupation in Vancouver

WE ARE IMPERIAL NO MORE!

Blockade of the Mount Polley mine site near Likely, BC, on the 2 year anniversary of tailings pond rupture, August 4, 2016.  Photo: Yuct Ne Senxiymetkew Camp.

Kukstemc Kleco Ociem. We thank everyone who came out to the Second Anniversary of Mount Polley Mining Disaster on August 4, 2016. We had many diverse groups such as Ancestral Pride, Downtown Eastside Power of Women, Native Youth Movement, No One Is Illegal, Rising Tide, Unist’ot’en Solidarity Bridge, Alliance Against Displacement, and Council of Canadians in attendance and sharing knowledge and experiences. The event was a great success with over one hundred people traveling all across Turtle Island to attend — even a bus from Vancouver. END_OF_DOCUMENT_TOKEN_TO_BE_REPLACED

Likely, B.C. – Things are back too normal at the Mt Polley mine in Likely.

This following a blockade by the Secwepemc Women’s Warrior Society yesterday.

“There were a few activists that gathered at the entrance to the access road to the mine yesterday,” said Imperial Metals spokesperson Steve Robertson.

“Their numbers grew throughout the day. There wasn’t much in the way of blockade activity until late in the afternoon when they were not allowing vehicles to go in and were slowing down vehicles that were going out. But that lasted for a short period of time and the activists were all gone by early evening.”

END_OF_DOCUMENT_TOKEN_TO_BE_REPLACED

Sacheen from Ancestral Pride, on right, was injured by a vehicle driven by Imperial Metals employee during the blockade at the Mount Polley Resistance Gathering, August 4, 2016. Photo: Ancestral Pride.

On the 2 year anniversary of the Mt Polley tailings pond spill that pumped millions of gallons of toxic tailings into Hazeltine creek a gathering of indigenous land defenders allies and supporters including the Power of Women Down Town East Side group joined the Sepwepemc Womens Warriors Society to bring awareness to the issue. There were work shops, feasting, and training, as well as ceremony and information sharing. Imperial Metals was issued a discharge permit recently and have done nothing in the way to rectify this situation and two years later there is still tailings infecting everything it comes into contact with. END_OF_DOCUMENT_TOKEN_TO_BE_REPLACED

Participants in the Resistance Gathering at Mount Polley, BC, (Secwepemc territory) on August 4, 2016, block the road leading to the mine site.

Secwepemc land defenders and allies have set up a road blockade at Imperial Metals’ Mount Polley mine on the two year anniversary of the devastating tailings pond spill. Kanahus Freedom (Manuel), a member of the Secwepemc Women’s Warrior Society says that the community is exercising its sovereignty and taking direct action, as the government of British Columbia recently issued a new operating permit to the mine. END_OF_DOCUMENT_TOKEN_TO_BE_REPLACED

First Nations members will protest re-opening of Mount Polley mine

Some of the devastation caused by Mount Polley tailings pond rupture.

Just a couple days away from the two-year anniversary of the Mount Polley tailings pond disaster, a First Nations group says it plans to protest against the mine re-opening.

Kanahus Manuel with the Secwepmc Women’s Warrior Society says it’s too early for the government to give Imperial Metals the green light.