Activists have held up construction on private property and surprisingly, they have the law on their side. 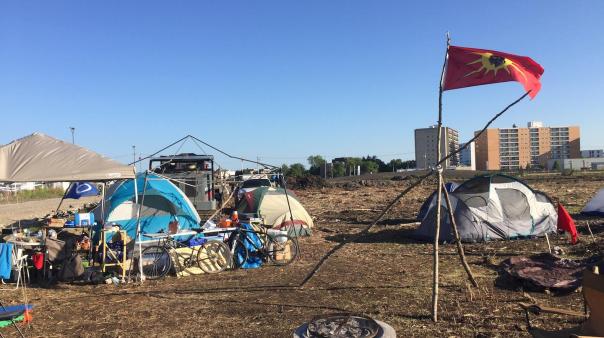 It’s nearly midnight, and a half-dozen Winnipeggers are sitting in the middle of 15-acre clearcut.

Someone occasionally gets up from their lawn chair to feed the campfire with branches from the surrounding area. But everything outside the small circle of light remains silhouetted: the CN rail tracks on one side of the clear cut, massive power lines on the other, the remaining aspen forest behind and a comically large mulching machine a few feet away.

One of the members poses a question to the rest of the solemn group.

Say that your bike is stolen. It’s then sold to someone else. Who does the bike then belong to? You, or its new owner?

It might sound a bit strange. But it represents the crux of why a group of Indigenous land defenders and allies recently seized the aforementioned mulching machine by planting an assortment of tents, banners and flags directly in its way.

They’re calling it the Rooster Town Blockade. Even under threat of a lawsuit, injunction and possible arrests, they’re not planning on going anywhere.

On July 6, contractors hired by a blond-haired man named Andrew Marquess—a private developer who’s had dozens of lawsuits filed against him over the years, including one launched in June by TV star Mike Holmes—plowed down about one-third of the aspen forest in order to build another suburb.

Marquess is the owner of the land and does have the legal right to do pretty much whatever he wants with it. After all, the City of Winnipeg did sign off on a controversial land swap deal with his company back in 2009 that saw him receive 59 acres of land while only giving up nine acres of unappraised land in return.

The deforestation came as a shock to many, especially given Marquess hasn’t submitted a development plan to the City of Winnipeg (that wouldn’t usually be a concern, but in 2014 he was penalized $170,000 by the city for building two entire apartment buildings without permits.)

“I think he wants to tell everyone that he is completely in charge,” says Cal Dueck, chair of the Parker Wetlands Conservation Society, in an interview with VICE Canada. “It’s definitely a political statement, saying ‘I’ll do what I want on my property, nobody tells me anything.’ It’s a way of asserting control. Or at least that’s what it feels like to me.”

The decision to clear cut without any warning pissed off a lot of people, including dog walkers who had used the forest’s paths for decades and environmentalists concerned about the immediate impacts of deforestation on wetlands, deer, migratory birds and prairie grasses.

A view of the clear cut. Photo by James Wilt.

But it especially angered Jenna Vandal, a Métis woman and student in the Native Studies department at the University of Manitoba.

That’s because the area has tremendous historical significance for the Métis.

From the 1880s to the late 1950s, it was the part of what was dubbed “Rooster Town,” a so-called “shanty town” where dozens of Métis families lived in dire poverty after being displaced from their homes with the spread of colonization. The ad-hoc village was demolished in 1959 to build a nearby mall, with its residents displaced (again) to the impoverished North End.

But the forested area was left untouched, remaining as a preserved archeological site of sorts.

“It was used by the Métis for ceremonies and hunting,” says Vandal in an interview with VICE Canada. “We found lots of ceremonial structures in here, and what appears to be housing structures, arrowheads and bison skinning tools.”

Dueck of the Parker Wetlands Conservation Committee adds that people have found tin, metal, an old foundation and parts of a house in the bush: “It’s pretty clear to us that this was inhabited by the Métis as part of Rooster Town,” he says.

Métis people were never consulted prior to the land swap in 2009, and obviously didn’t have a say when they were kicked off the land in the 1950s.

And those events followed an even longer pattern of dispossession, including Canada’s failure to live up to its promise to provide 1.4 million acres of land to Métis children as part of the Manitoba Act of 1870 (which, in 2013, was dubbed by the Supreme Court “inconsistent with the behaviour demanded by the honour of the Crown,” about as harsh as a reprimand as you’ll hear from such folks).

“If treaty people argue that their land interests have not been recognized very well over the years, the Métis interests in the land for many, many decades were even more marginalized than that,” says Frank Tough, professor of Native Studies at the University of Alberta and expert on Métis economic history, in an interview with VICE Canada.

“It’s hard to imagine. For many years, they have been a forgotten people.”

Vandal and her allies are doing their best to halt that 147-year trend literally in its tracks.

On July 14, she erected a tent in front of the mulching machine. It didn’t take long before other Indigenous people and allies started to show up, bringing food, supplies and more tents. The American Indian Movement and Urban Warrior Alliance have established a consistent presence on site as well.

Almost every morning since the seizure of the mulching machine, the site’s project manager has showed up at around 6:30 AM to wake the campers and loudly proclaim—while filming the scene on his phone—that the land is “private property.” In response, Vandal or another camper replies that the land is contested Métis territory and that Indigenous peoples weren’t consulted when the land swap happened.

After that, the project manager usually gets in his vehicle and leaves, sometimes returning later in the day to lurk about the site.

But the ante was seriously upped when Marquess filed a lawsuit and requested an urgent injunction for what he called damages from the “impaired ability to develop the Property, resulting in lost revenues and business opportunities.”

His lawyer claimed that police “has failed to remove the trespassers and even granted them permission to have fires.” Furthermore, they contended that an axe used for chopping wood and clearing stumps should be considered a weapon, telling CBC “it’s a weapon that has a blade on it” and “it’s currently unknown how many other weapons are currently being hidden in the illegal encampment.”

Many expected the injunction would be granted, with some blockade members considering the possibility of refusing court orders and facing arrest. But surprisingly, on July 26, a provincial judge decided not to grant the request, with Marquess failing to provide evidence of irreparable harm.

Further undermining the request was that the defendants were only served notice two days before the court date, not leaving enough time to organize any defence or legal counsel.

Now, the blockade has until early November until the injunction is before the courts again.

“We know we’re safe and can stay here,” Vandal says. “Our next move is just planning more long-term and being able to get enough people to stay here the night and hours during the day, which is difficult sometimes as people have families and jobs. Right now, we’re all just taking turns staying here, which can get very taxing.”

Following the decision, the blockade released the mulching machine back to the owner under the condition that he doesn’t return to the site with it until an injunction is granted or the city approves a development plan.

Currently, he’s appealing the court decision in order to accelerate the injunction hearing. His lawyer has also stated that “our client definitely is entitled to take steps to clear the property, pursuant to Manitoba’s trespass legislation.”

“I read that as a threat of real violence to the protesters,” Dueck says. “That, to me, is shocking that he would publicly say that through his lawyer: he thinks he would be protected because of his money with issuing those kinds of threats.”

Members of the blockade are keeping their heads down and preparing for the months to come. Vandal is in contact with the Manitoba Métis Federation (MMF)—which has already indicated support for the blockade—and has already met once with Winnipeg Mayor Brian Bowman, who himself is Métis.

At this point, Vandal says an ideal outcome would be for a complete moratorium on clearcutting until consultation with the MMF and Treaty 1 First Nations, and eventual expropriation of the land by the city.

“Winnipeg just signed the reconciliation accord, which are nice words, but let’s put it to action,” she says. “This is a great opportunity for Bowman to put those words to action and set a precedent for other cities and municipalities.”